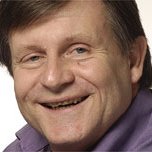 A former motor trade finance specialist has swapped figures for letters in retirement and is now a published author.

Barrie Hyde (pictured) spent nearly 40 years in the trade, latterly as a general manager at Bentley Financial Services and Volkswagen Financial Services, a field manager at Ferrari before retiring as a motor finance consultant. He is also a presenter on BBC Three Counties Radio.

"Retirement can be like a death in the family and often people find it very difficult to find a way forward," he told AM.

"I spent a period of time in the wilderness before discovering a second career."

From writing a diary to joining a writing club, he then began writing a novel.

"I was lucky. I found a way forward and by using my sales skills honed in the motor trade eventually found a publisher."

His book is called 'A Higher Authority' and is about a young Oxford graduate with a gift for languages who joins MI5 and is then seconded to ‘A Higher Authority’, an organisation funded through government sources from around the world which nobody would admit to.

More on the tale of industrial espionage.