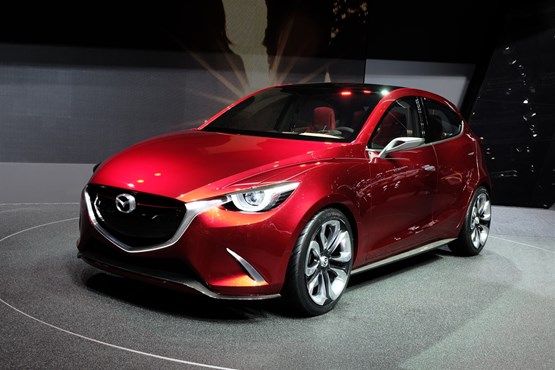 Mazda has not revealed efficiency figures for the new engine yet, but the new B-segment model will also come with a new Skyactiv six-speed manual and automatic transmissions, i-stop idle-stop and i-ELOOP brake energy regeneration systems.

Mazda expects its new clean diesel-powered supermini to achieve the best fuel economy of any combustion-engine powered vehicle available in Japan. Insiders have said the new engine will have a CO2 output below 90g/km. The Japanese brand will also be offering a 1.5-litre petrol option.

Mazda revealed the Hazumi concept (pictured) at the Geneva Motor Show this year and the production version is expected to look very similar to the concept model.

The production version of the new 2 is expected to reach UK showrooms next year.

Mazda sells around 24,000 Mazda2s globally but is expecting the new model to double sales to nearly 50,000 units.

Jeff Guyton, boss of Mazda Europe, admits the business is stronger with larger cars like the CX-5 and Mazda6, but the Mazda2 will be an important car for the UK market, which has been its biggest market in Europe.

He said: "It's really important for our dealer network to have a high volume car which is also the entry model to the brand for most customers."

Mazda UK dealers will also get a halo model with the new MX-5 next year. The new model will also be sold as an Alfa Romeo Spider following a partnership with Fiat Chrysler Automobile.