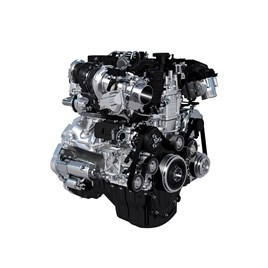 Jaguar Land Rover (JLR) has developed a new range of Ingenium engines which will include a sub-100g/km CO2 model for use in future models.

The new engines will replace Ford-derived engines and the sub-100gkm CO2 model will be in the BMW 3 Series rival, the XE saloon later this year.

JLR has developed the engines itself and there will be diesel and petrol variants.

The Ingenium engines will debut as 2.0-litre four-cylinder engines, but JLR hinted to AM sister tile CAR magazine that there was scope to create a 1.5-litre three-cylinder version.

“We believe that with the range of technologies we are investing in, Jaguar Land Rover can absolutely satisfy the often conflicting requirements of delivering engaging high-performance luxury vehicles that reduce our carbon footprint in the long-term.”

JLR has invested £40 million to expand and enhance its Powertrain Engineering facility at its Whitley Technical Centre to help support the Ingenium family or engines.

The brand has also made several announcements about its future development and technology, including its ‘self-learning car’ and virtual windscreen.