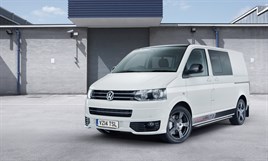 Volkswagen Commercial Vehicles UK has launched a new 10-point customer service programme across its dedicated network of dealers to make sure it can deliver on its servicing promises.

The new promises will be delivered by Volkswagen’s dedicated commercial vehicle network of 71 sales and service centres, as well as 28 authorised repairers.

Kevin Rendell, Volkswagen CV UK head of service & parts operations, told AM that after joining the business in February 2013, he reviewed how its dealers were performing on the previous service programme and adjusted it following research with customers inside and outside the brand.

The new promises are centred on marketing materials which are titled ‘to keep you moving, we start by keeping a promise’.

Rendell said: “We were actually already offering a lot of what customers were asking for in the feedback we received, but we just weren’t talking about it enough.

“It will also work as a sales tool for the network. We’re not just selling vans; we’re selling a complete service package which goes with them.”

Customers can choose to pay for servicing through monthly, yearly payments or as and when each service is taken. Fitted parts pricing has been fixed nationally.

A highlight from the new customer promise list was to replace any customer’s vehicle with a like-for-like replacement, even going as far as sourcing a car out of brand if it means getting a customer back on the road.

Rendell said: “We will of course look to keep customers in VW products where possible, but if they need a cherry picker or a temperature controlled van we will source that vehicle for them even if it’s outside brand.

" It’s more important for us to get that customer moving again so they can minimise the impact on their business.”

One area Rendell admitted needed improvement was diagnosis time. The previous promise was that all VW dealers would diagnose any problem with a van within 30 minutes.

Rather than fail to deliver on the promise, the decision was taken to extend guaranteed diagnosis time to one day.

Rendell said: “We’ll improve this in time, but I would much rather promise something we can deliver.

“These new promises have been given the hardest soft launch in the network imaginable. We’re launching these promises knowing that we can deliver across the network.”

Rendell said dealer bonus payments have not been linked in with the new customer promises, but this was something which would be considered in the future.

He also told AM there would be more servicing launches from VW CV soon with the business considering the idea of video appraisals for servicing which could be emailed to customers, as well as extended opening hours.