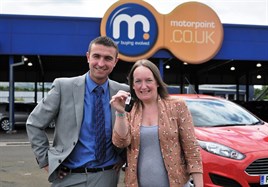 A mother of two from Cranhill in Glasgow is celebrating after a winning a new car from Motorpoint.

Caroleanne Jordan beat competition from hundreds of other people from across Glasgow to win a Ford Fiesta 1.5 TDCi Style worth £15,000 from the car supermarket as part of its 10th Anniversary celebrations.

She took part in a special event at Motorpoint Glasgow on Hamilton Road in Mount Vernon hosted by DJ Mark Martin and other members of the Clyde 1 team.

"I can’t believe I’ve won," she said. "I’m the unluckiest person I know. I’ve never even got a couple of numbers on the lottery. So to go from that to win a brand new car from Motorpoint is quite incredible."

She was one of a 100 people invited to Motorpoint Glasgow to play a series of party games and with it the chance to win Britain’s best-selling car.

"“When I got to there and saw all the other people I thought – I don’t stand a chance. I was tempted to turn around and go home but my daughter Chloe said you’re here now, go for it – you’ve got nothing to lose. I am really glad I listened to her."

She had been driving a 56-reg Renault Megane Scenic, plans to use the Ford Fiesta mostly to get her back and forth to work.

“I really can’t believe I’ve won a car," she added, "And one in red, which is my favourite colour. I’ve always wanted a new car but I’ve never been able to buy one. I can’t thank Motorpoint enough!”

Adam Gilmore, General Manager at Motorpoint Glasgow, added: “I am absolutely thrilled for Caroleanne and hope she enjoys driving her brand new Ford Fiesta from Motorpoint.”