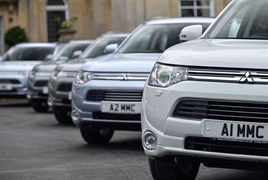 Mitsubishi has launched a new company car charter for its dealer network in response to a surge in user-chooser enquiries.

Since the launch of the 44g/km of CO2 Outlander PHEV plug-in hybrid earlier this year, the brand’s dealers have seen a large increase in footfall from user-chooser company car drivers.

UK managing director Lance Bradley acknowledged that Mitsubishi’s dealer network was not used to handling this type of customer, so the company introduced a new programme to ensure customers received a consistent experience.

“Dealing with the company car driver is a new experience for our dealers,” he said. “It’s not that they don’t want to – the products on offer meant they never really had to.”

Bradley added that the scheme’s creation was a direct response to customer feedback. “After a few difficult years, it’s great to have such a good product,” he said.

“I had messages on social media from customers who’d had a bad initial dealer experience, but still wanted to try the product. They were a catalyst for the scheme.

“We’ve never been strong in fleet. The Shogun and L200 have seen good corporate sales, but suddenly we have a car that meets fleet requirements.

“The dealers have been inundated with test drive requests for the Outlander PHEV. We’ve ramped up our marketing and enquiries are up as a result. This makes sure the dealers can handle them properly.”

He added: “Looking after a company car driver isn’t complicated. Our dealers have had a culture of excellent service, and are very good at looking after local businesses in their community. The charter makes it really clear what we expect of our dealers when looking after these customers.

“It’s simple stuff – we want customers to be treated properly, for promises to be kept, for dealers to call back when they say they will.”

Bradley says the scheme has gone down well within the network. “We’ve had a really positive response. No one has said they won’t sign up, and we expect all our dealers to be registered within the next few weeks,” he said.

As part of the programme, dealers who undertake the training have been allocated a second Outlander PHEV demonstrator, specifically for potential business customers.

“They’re great people, and Mitsubishi gives them a new challenge,” said Bradley. “It also gives us a chance to offer a more personal, tailored service.”

His other focus is on medium-sized businesses – those with around 10 to 25 vehicles.

“People looking after vehicles in these companies won’t think of themselves as running a fleet,” said Bradley.

“They won’t be massively interested in car management, but we hope they will like our local dealers.

“We’ve given our dealers special terms on pricing to target these companies, without having to come back to us first.”

Mitsubishi UK has increased its 2014 sales forecast for the model from 1,500 at launch to 10,000. The company expects to sell around 3,000 diesel Outlanders.

The range is also soon to include a commercial version of the Outlander PHEV, which will be eligible for the Government’s plug-in van grant.

“Supply is no issue,” said Bradley. “We can get as many Outlander PHEVs as we need from Japan. There’s now a two-month lead time, but the fleet market in particular is used to waiting for vehicles and company car drivers are more likely to plan their vehicle changes ahead of time.”

Bradley said: “We’ve had a good relationship with Government departments for a long time. Now, working with them is like pushing on an open door.”