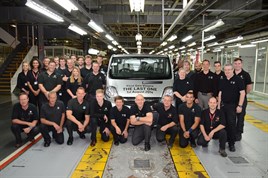 Vauxhall reached an important milestone on August 1 as the last current generation Vivaro rolled off the production line at its Luton plant.

Jubilant workers cheered off the Vivaro van, the 957,107th built there, before they start building the all-new model later this month.

This milestone vehicle will take pride of place at Vauxhall’s Heritage Centre at its Griffin House headquarters in Luton.

The all-new Vivaro secures 1,200 jobs, a 10-year contract and a £185 million investment at the Luton facility.

Vauxhall announced last month that it will add a second shift at its Luton plant in January 2015, creating around 250 new jobs.

Rival Ford shut its Transit factory in Southampton last year making Vauxhall’s Luton facility the sole flag bearer for UK van manufacturing – on a site where over eight million vehicles have been built since 1905.

Vauxhall said the plant is a significant contributor to the local and national economies building nearly a million Vivaro vans since 2001, including 44,000 vans built in 2013, and is a major exporter with 52 per cent of production destined for European markets.

“The current Vivaro has been a huge success and our workforce at Luton is very much looking forward to building the all-new model,” said Tim Tozer, Vauxhall’s chairman and managing director.

“The Vivaro van is of critical importance to Vauxhall and its manufacturing facility in Luton. I’m very proud of the men and women who build this vehicle to world class levels of quality and productivity.”