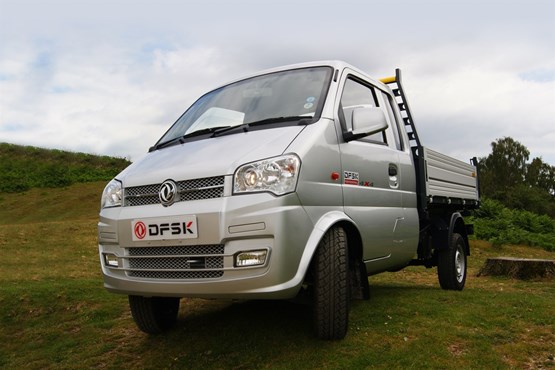 A relative newcomer to the UK market in a segment that has been largely neglected since 2000, DFSK  is providing dealers with a new business opportunity.

DFSK UK is a British company, founded in 2010 to supply a Chinese-designed and built range of 1.0-litre and 1.3-litre petrol LCVs priced between £7,500 and £16,500 (excluding VAT, first registration, delivery charges etc), and offering single and double cab pick-ups, tippers, drop- and fixed-side vehicles, plus a minicamper and minibus.

New for 2014 is a ‘Big Cab’ variant and, from July, a switchable four-wheel drive system, manufactured in Germany, priced from £12,995.

Next year, a C Series range will be introduced, which will see the load capacity of DFSK vehicles increase from the current maximum of 900kg to 1.2 tonnes. The C-series will also be offered with the first diesel in the range, a 1.3-litre engine engineered by Fiat.

2014 is proving to be the most important year in the growth of DFSK UK, with early problems in vehicle supply resolved and a dealer network growing steadily. Retailers acknowledge the opportunities provided by the re-emergence of a compact LCV in the market.

Exploiting an underserved niche in the market, DFSK UK has found buyers from local councils, health authorities, and small businesses looking for a value-for-money vehicle suited for short urban journeys while offering respectable load-carrying capability. There are 34 dealers in its network.

Typically, DFSK UK says, they are dealers with a single franchise looking to introduce a non-competing, no frills, bolt-on brand. So the DFSK name has been seen alongside Mitsubishi, Suzuki, Isuzu and Citroën in dealerships.

After a review of the LCV marketplace and analysing the new opportunities generated by the new Big Cab, which offers chassis cab capabilities, DFSK is rolling out a new commercial B2B-dedicated network called DFSK Professional.

These dealers will be currently selling other brands, which the DFSK Big Cab range will complement rather than compete against.

The aim is to create a total dealer network of 60 sites in the next two years.

New DFSK vehicles are sold with a three-year, 60,000 mile warranty and a used vehicle programme launched before the end of 2014 will offer a 99-point vehicle check, a one-year warranty and AA cover.

Start-up investment requirements are modest – signage, flags and parts to ensure dealers meet the standard of ensuring service customers are back on the road in their minivan within 24 hours. The cost of taking on the franchise is less than £1,000. On margins, dealers can earn in excess of 10%.

The origins of DFSK in the UK

The Chinese company Dongfeng Sokon, from which the DFSK name derives, was founded in 1969.

DFSK was formed as a joint venture between DFM and Sokon Motor Group and operates six manufacturing sites within China.

The DFSK range of vehicles is sold across the world. DFSK UK is a British company operating from Southampton, established to import and distribute DFSK mini vans in the UK and Ireland. Also known as Vestatec Automotive Distribution, it is part of Vestatec, a leading automotive parts manufacturer and aftermarket distributor of vehicle components.

Beech’s Garage, Stoke on Trent, has had the DFSK franchise since June.

Aftersales manager Jeff Bromley said: “As existing Isuzu, MAN and ERF main dealers, the DFSK range has provided a new beginning for us. It is a fresh market niche for us and is bringing a new customer base, which has inspired the business – and staff – to operate in new ways and we’re enjoying the challenges this entails.”

Beech’s is putting its first DFSK ads in its local paper and held an open day for the public to get their first taste of the range in September.