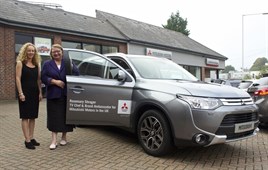 Celebrity chef and Mitsubishi brand ambassador, Rosemary Shrager, has picked up the keys to her new Outlander.

Shrager collected her new car from Grosvenor Garage in St James Road, Tunbridge Wells before heading to the Cake & Bake Show in Earls Court, where she will take centre stage from October 3rd to 5th.

The TV chef, who was most recently a judge on “Celebrity Masterchef” and runs a cookery school and patisserie in Royal Tunbridge Wells, said: “I’ve certainly got a busy few months coming up. The Cake & Bake Show is the biggest food show in the country and I’m really, really looking forward to it. Then I’ll be doing panto which I just adore, I want to do it every Christmas, it’s so much fun.”

It’s eight months since she first became a Mitsubishi brand ambassador and she said: “I value the relationship with Mitsubishi. We all get on very well and we’re very like-minded people. The guys at Grosvenor Mitsubishi have been incredible. I have been in a few times to ask them to show me how to do things and they are so nice, they have been so helpful. It’s fantastic.”

Nicki Munns, marketing co-ordinator at Grosvenor Garage, said: “We’re delighted to support Rosemary and it’s always nice when she pops into the dealership. The Outlander suits Rosemary perfectly as it’s a lovely refined vehicles which is great for doing lots of miles driving to events all over the country.”