Nigel Mansell to own Mitsubishi dealership 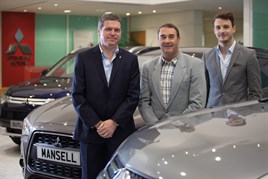 Former Formula One world champion Nigel Mansell has acquired a Mitsubishi franchise for his car dealership in Jersey.

The British motor racing legend, who won the 1992 Formula One World Championship and the 1993 CART Indy Car World Series, will open the Mitsubishi franchise on September 16 at his family-run dealership in St Helier, which will be managed by his son and managing director Leo.

-run dealership on Jersey. The new showroom and service centre, which will be managed by his son Leo, will open for business on 16 September.

Mansell, who is chairman of The Mansell Collection dealership, which opened in St Helier in 2013, said: “Our dealership has gone from strength to strength and the time is right to get a franchise on board. We wanted a brand that crossed a lot of boundaries of motoring and with Mitsubishi there’s something for everyone.

The dealership also houses The Nigel Mansell Story – a museum displaying his trophies and some of his race-winning cars, including the Williams FW14B in which Nigel won the world championship in 1992.

Leo said: "Mitsubishi is a perfect fit for us. The range of vehicles excites me and this is a great opportunity. Having the museum at the dealership is a real asset and it’s been a far bigger success than we imagined.”

He added: “We are eager to show the Mitsubishi range to the island. Jersey will be surprised by what they get from a Mitsubishi.”

Lance Bradley, managing director of Mitsubishi Motors in the UK, said: “It says much about Mitsubishi Motors’ current and upcoming products, and our plans for the brand in the UK, that Nigel and Leo have chosen to join us, because there are a lot of brands that would have loved to have them.

"Their vision is one of an incredible level of service for the customer and that aligns perfectly with what we do. We’re absolutely delighted to be working with them.”