Is it finally time to license motor retail professionals? 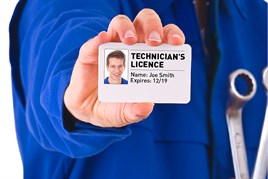 “Generally speaking, the feedback has suggested many businesses would welcome the opportunity to demonstrate to consumers the high standards they have,” said Nash.

“Franchised dealers are in the situation where they are competing on cost against operators with little or no investment in training.”

Robin Luscombe, managing director of Luscombe Suzuki in Leeds, said licensing should be combined with manufacturer training, so the audits and standards imposed by manufacturers should be tied in with IMI licensing to avoid duplicating costly training and testing. “It sounds very simple in theory, but in reality it will be much harder to get manufacturers, dealers and regulators all on the same page. But that should be the aim.”

Adding that fragmented regulations, audits and qualifications simply confuse customers, he said: “I’d be more than happy to participate if we had one qualification to aim for that was nationally recognised by both the industry and consumers.”

What about the non-franchised car dealers?

Jane Russell is director of Russell Automotive Centre, an independent VW Group specialist in Kingsbury, North West London. She said professional licensing can only be a good thing.

“You need to make sure your gas fitter is registered and you wouldn’t let just anyone operate on you if you’re sick. People presume that people working in garages are licensed and they’re not.”

Russell believed having her technicians licensed would add to the status and reputation of her business, but that once everyone was registered it would no longer be a unique selling point to attract customers, rather a system to educate the public and raise awareness.

Nash emphasised that the current situation wasn’t fair to those who take pride in their work and invest in training, adding: “Our aim is to have a situation where you can’t run a vehicle servicing business without proving the competency of your staff to do so. This would hand the advantage to the best businesses and force the poor ones either to catch up or perish.

“Put simply, we want to see an end to the situation where literally anyone can set up a business to work on cars.”

Initially, the IMI is only talking about licensing for people who actually work on maintaining and repairing cars. However, it believes there will be a knock-on effect, particularly in the area of used car sales. The idea would be that customers buying a pre-owned vehicle would be able to check if a particular car has been serviced by a licensed technician as part of its service history. Consequently, it would be in the best interests of those in sales to ensure used cars have been maintained by qualified people, as this could affect the value.

So where does the issue go from here? Nash said discussions were going on with various industry professionals.

“We will be using this information to form a solid proposal to present to the sector and to MPs. We believe a working model for licensing could be formed based on the IMI’s Professional Register, with continuing professional development (CPD) and current competency requirements placed on technicians.”