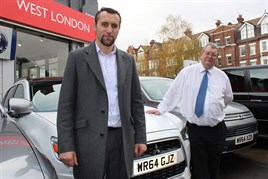 West London Mitsubishi is a family-run business which has become the latest recruit to the Japanese carmaker's UK dealer network.

With Ardi Bala as dealer principal and his brother Artan as service manager, the business started life as Putney Service Centre in 2005 before moving to a freehold property in Castelnau in Barnes in 2011 as the West Motor Company and gaining MG and SsangYong franchises.

It has now expanded with a Mitsubishi franchise. Ardi Bala said: "It’s been a successful business for us and we’re really looking forward to being a Mitsubishi dealership. It’s very exciting and hopefully we will have a good future with them."

He said he was attracted to Mitsubishi by the brand's heritage and new products, especially the Outlander PHEV hybrid SUV, which is exempt from London's congestion charge, and a pending new L200 pick-up.

"The PHEV is fantastic, especially with us being in London,’ said Ardi. ‘It’s been doing really well elsewhere in London so hopefully it’ll do the same for us. With all the tax benefits and no congestion charge it’s a great thing for London, so it should be a success. We’re looking forward to doing well with it."