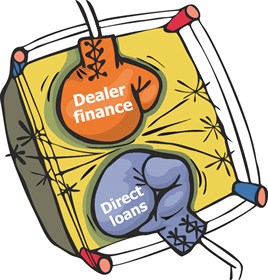 An attack from high street and online lenders on dealer point of sale finance  is expected as the UK economy continues to gain strength. The British Banking Association is tracking a steady increase in credit card and personal loan approvals and says consumer borrowing growth in 2014 was the fastest in six years.

However, the motor retail sector seems to have its guard well up and independent research for the Finance and Leasing Association suggests a high level of satisfaction in showroom loans.

Karl Werner, head of sales and marketing, MotoNovo Finance, said: “There is more personal loan activity, and dealers need to be ready, but they should not be afraid of the competition.

“It can be all too easy for dealers to fall into the trap of believing they are uncompetitive in terms of APRs when looking at headline rates from some lenders. This is far from true.”

He said many customers would not be accepted at advertised rates, or at all. “Dealer finance is more competitive when it is recognised that personal lenders’ lowest rates are often only available for high balances,” said Werner. “Also, dealers have products such as PCP.”

Some motor lenders back this up with incentive schemes such as MotoNovo Finance’s discount shopping initiative, offering borrowers a chance to reduce household bills.

Dealer finance is better placed to compete against high street and online lenders than when the Finance and Leasing Association launched an initiative seven years ago to stem the loss of showroom loans.

Its specialist automotive finance (SAF) scheme is working: FLA members’ share of showroom advances for private new car sales was 75.9% in November. A motor finance spokesman at the Finance and Leasing Association said: “Penetration levels have been consistently above 70% since the end of 2012. There is little to suggest this will not continue thanks to the availability of attractive finance deals and strong consumer demand. New car finance offers have helped narrow the gap between the cost of funding a first registration versus a used one.”

It’s just as well the FLA acted when it did in 2007. Last April, the Financial Conduct Authority (FCA) became responsible for consumer finance with a government brief to promote innovation and healthy competition between financial services firms. Lenders know they must treat consumers fairly, or risk an FCA fine, and potentially a heavy one.