10 of the best from the Geneva Motor Show 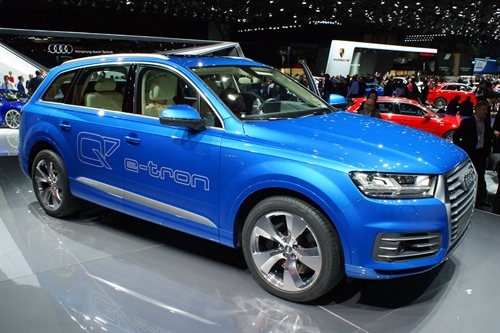 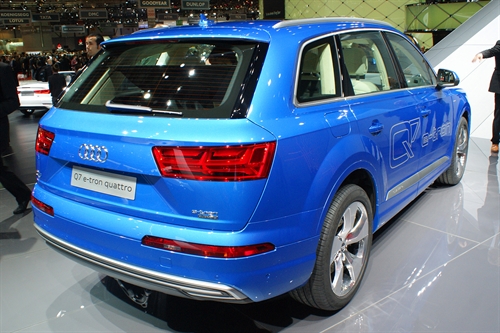 Exterior changes include a new grille, finished in silver on the S-Line model. The LED headlights and edges have been revised, creating a sportier look. The interior has had a heavy makeover, with a new wider, narrow dashboard design.

From launch, there will only be one engine variant available, a 268bhp 3.0-litre turbo-diesel unit returning 47.8mpg. A 215bhp variant will be added later in the year. The new Q7 e-tron, a plug-in hybrid diesel model, will also arrive towards the end of the year. The Q7 e-tron differs slightly to the brand’s other e-tron models – a new powertrain has been developed in the form of a 3.0-litre turbodiesel unit, which is combined with an electric motor to develop 368bhp and 700Nm of torque.

Despite the Volkswagen Group owning Porsche, it didn’t use the Cayenne’s S E-Hybrid powertrain in the form of a 316bhp supercharged V6.

The Q7 e-tron has a range of 35 miles in solely electric mode. The new model will rival the likes of the Volkswagen Touareg and the Volvo XC90. Prices are to start from £45,000, with first deliveries expected in the summer. 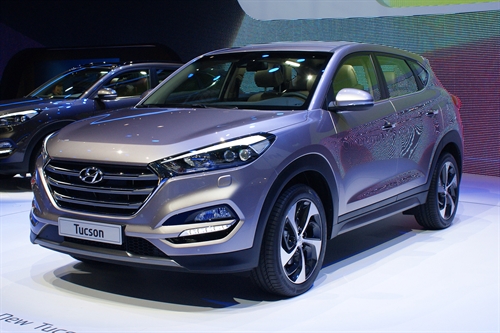 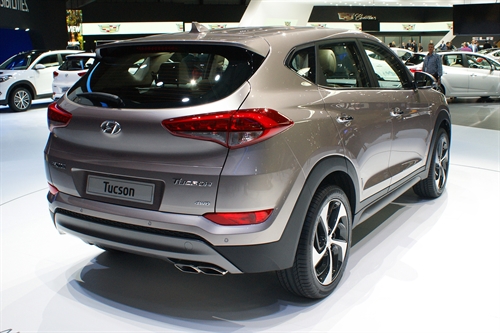 Hyundai has designed the all-new Tucson as a replacement for the current ix35 model, after doing the opposite in 2010.

The five-seater has a much more rugged appearance than the old Tucson and the ix35, with a strong frontal design, bringing it in line with the brand’s design identity and making the range much more cohesive.

The new Tucson is built on the same platform as the Kia Sportage and has 513 litres of luggage capacity – 83 litres more than the rival Nissan Qashqai.

It will be available in two petrol variants; a 1.6-litre unit with either a 133bhp or 174bhp output, and three diesel variants; a 113bhp 1.7litre or a 2.0-litre engine with either 134bhp or 181bhp – four-wheel-drive will also be available on 2.0-litre versions and all are mated to either a six-speed manual, six-speed automatic or seven-speed dual-clutch automatic transmission.

Hyundai expects to sell about 20,000 units of the new model in its first year. 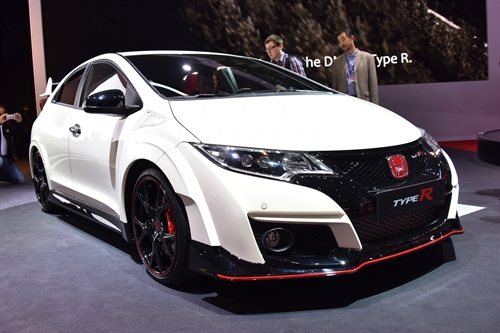 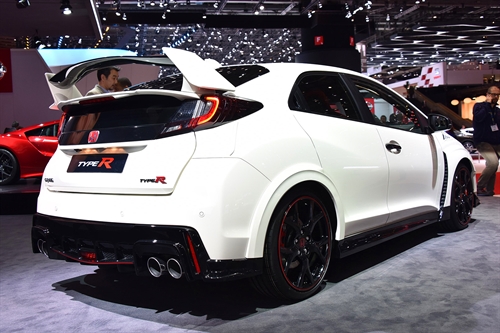 The new Honda Civic Type-R was a showstopper at this years’ Geneva Motor Show. People flocked around the covered-up model, which sat alongside the all-new NSX – also on sale this year.

Labelled as a ‘race car for the road’ and a rival to the Focus RS, it features a 2.0-litre turbocharged VTEC petrol engine, which is mated to a six-speed manual gearbox. Unlike the RS’s all-wheel-drive system, the Civic Type-R is front-wheel-drive, with an output of 306bhp and 400Nm of torque. The new model also reaches 62mph in 5.7seconds, with a top speed of 167mph.

The exterior sees the addition of a large rear wing and quad exhausts, plus 19-inch alloy wheels and a Brembo four-pot brake package are featured as standard.

Its completely flat underside has been designed to aid in aerodynamics.

Inside are suede seats, a leather sports steering wheel, and Android-based infotainment system. A GT pack is also available for an additional £2,300, adding automatic lights and wipers, and parking sensors, Garmin sat-nav and electric folding mirrors.

The Honda Civic Type-R will be priced from £29,995 and will go on sale in the summer. 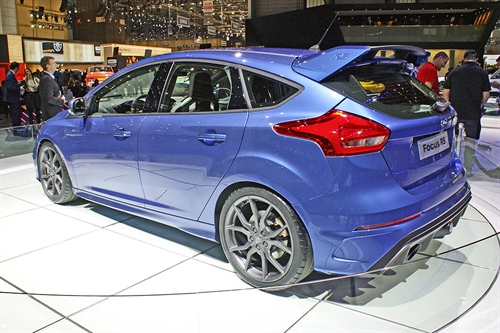 With ‘more than’ 316bhp (actual bhp is yet to be confirmed), it is going to be fast.

The exterior design is subtle when compared with its predecessor and against its rival this year – the Honda Civic Type-R . The Focus RS features a muscular body kit, with a redesigned front grille and bumper, and rear spoiler.

There are high hopes for the third-generation Focus RS – between 2009 and 2011, UK dealers sold more than 4,000 of its predecessor, which still have strong residual values.  It will be interesting to see how those are affected early next year when the latest model goes on sale worldwide for the first time. 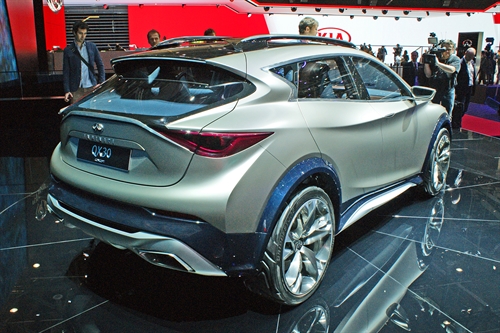 The Infiniti QX30 has been revealed at the Geneva Motor Show and it’s a rugged, beefed-up version of the Q30 concept from a couple of years ago.

The compact SUV is due to appear in showrooms next year, but how close the production model will look to this concept remains to be seen, especially as no specification or pricing has been revealed.

The exterior styling sees a skid plate to the rear and a chrome front bumper, but it is the rugged black plastic surrounding the wheel arches that really gives the crossover a distinctive look. The body looks wider and thicker with the 21-inch alloy wheels and large tyres.

The concept has been designed as a rival to the Audi Q3 and Range Rover Evoque.

Infiniti said it is a preview of a family of vehicles designed to be matched with a wide range of powertrains, both petrol and diesel.

Infiniti executive design director Alfonso Albaisa said: “The QX30 Concept looks as capable as it is meant to be. The artistic touches we put in lift the crossover to another level from being just another utility vehicle.” 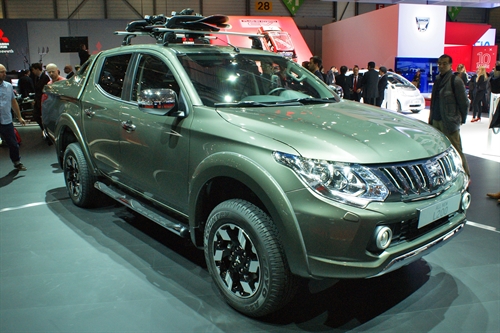 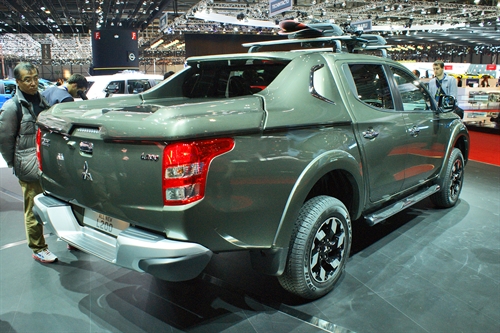 The current Mitsubishi L200 has been on the market for 10 years, so it was high time for a replacement. The new fifth-generation pick-up will go on sale later this year but, interestingly, its predecessor will continue to be sold alongside it for 12 months.

The new L200 has been designed as a more comfortable drive to make it more refined, without losing its famous ruggedness and practicality.

It is also the first pick-up truck to feature paddle-shifters. Four-wheel-drive, lane departure warnings and hill-start are also available.

The current generation recently reached the sales milestone of 1.1 million since launch in 2005 and Mitsubishi expects the same success from the new model.

On the outside, there aren’t massive changes, but the new model does get redesigned front and rear ends.

A 2.4-litre MIVEC turbocharged diesel engine is mated to a six-speed manual gearbox, with a 17% improvement on CO2 emissions over its predecessor. UK managing director Lance Bradley told AM at the show that he expects emission-based taxation to toughen in the near future, so work has been done to get the CO2 down from 199g/km in the current model to 169g/km. 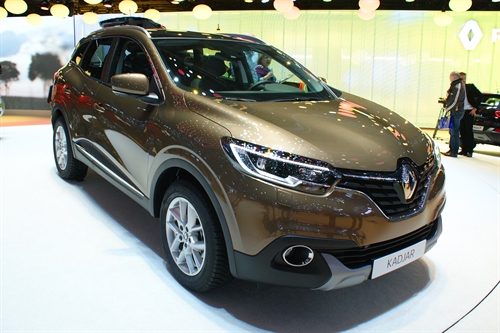 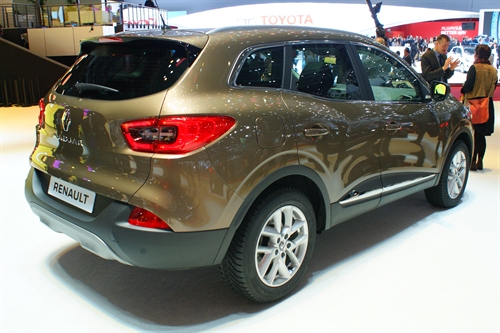 Renault revealed the completely new Kadjar ahead of the show via a social media campaign, and seeing it in the metal, it shows real promise.

It has a similar front-end look to the rest of the Renault family, with a wide distinctive grille connected to its LED headlights.

The Kadjar sits on the Renault-Nissan Alliance-designed CMF C/D platform, which is also used in the Nissan Rogue and Nissan X-Trail models. It has been designed as an option to branch the size differences in the Renault Captur and Koleos crossover models.

Engine options include two diesel variants and one petrol; the dCi 108bhp and dCi 128bhp diesel units and a TCe petrol option with 128bhp – engine-dependent, it is available with a six-speed manual or six-speed dual-clutch transmission.

A switch provides access to three modes, Lock, Auto and 2WD. Lock puts the vehicle into four-wheel-drive and transfers 50% of torque to the rear of the vehicle. Auto shares the torque between the front and the rear according to the level of grip. And 2WD operates solely in two-wheel-drive.

The Kadjar is due to go on sale this summer. 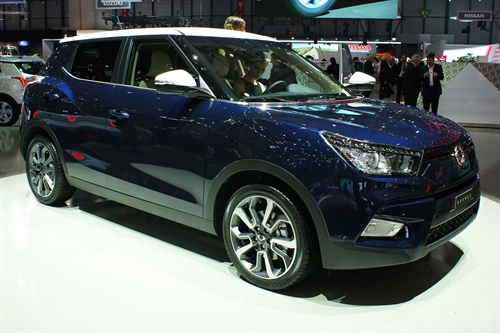 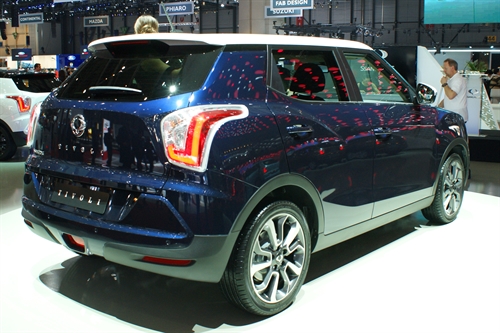 The all-new SsangYong Tivoli is a crucial new car that will take the Korean brand into a popular market segment.

The Tivoli sits on the first new platform developed since SsangYong’s takeover by Mahindra.

Designed as a rival to the Nissan Juke, the new Tivoli seats five and is available with a choice of 16- or 18-inch alloy wheels.

Connectivity will include a USB port and HDMI that enables smartphone users to play their video content on the seven-inch colour touchscreen.

SsangYong includes a five-year/100,000km warranty. Although specifications and pricing are yet to be revealed, the model is set to go on sale in May. 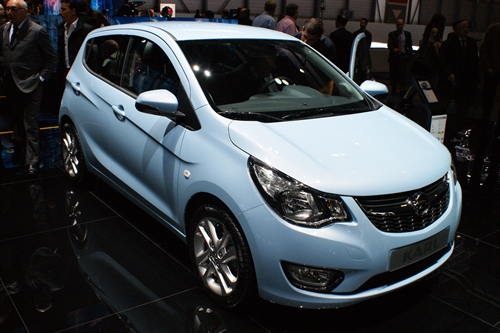 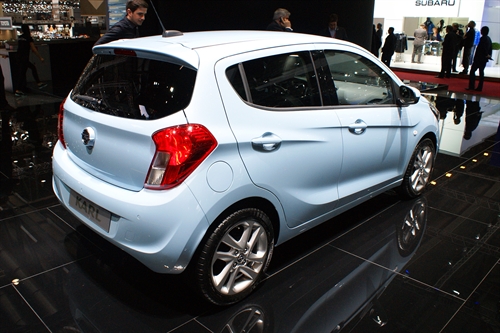 The original Viva went on sale in 1963 and ceased production in 1979, and Vauxhall has brought the name back for 2015 on a rival to the Toyota Aygo and Škoda Citigo.

The compact city car is set to replace the Agila and will be the entry point to the Vauxhall range. The Viva will be available with a choice of 10 exterior paint colours and a variety of 14- to 16-inch alloy wheels.

Like the Adam and Corsa, the Viva is connected with the Intellilink infotainment system, allowing the integration of Apple iOS products.

The Viva is the latest model to feature the new 1.0-litre three-cylinder Ecotec engine, recently seen in the new Adam Rocks Air and new Corsa. Specially developed for the Viva model, the 74bhp powertrain is mated to a five-speed transmission. There is also an optional ecoFLEX package, with a front spoiler lip, roof spoiler and low rolling resistance tyres, which has been designed to achieve improved emissions and fuel economy.

It will arrive in dealer showrooms this summer and will be priced from £7,995. 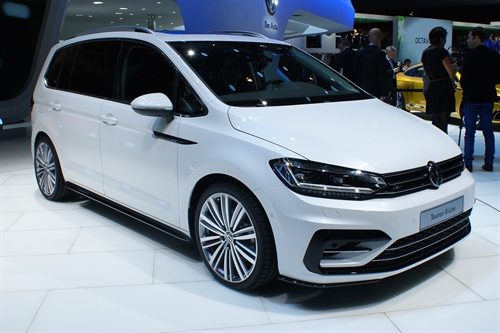 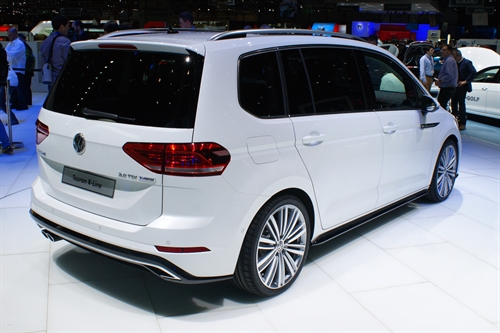 The Volkswagen Touran has been updated to fit alongside much of the rest of the VW range. The Passat and the Golf SV were both recently replaced to fit in with the brand’s current design.

The new model bridges the gap between the Golf SV and the seven-seater Sharan MPV model.

The completely new interior sees a more premium feel throughout and features a new folding-seat function, allowing seats to be shifted to create a flat floor.

The new model is available in both five- and seven-seat variants.

There is also an R-Line package available for the Touran, giving it a sportier look with special R-Line exterior bumpers, while inside there are exclusive seat covers.

Order books will open for the all-new Touran this summer, with first deliveries expected in November.