Vertu Motors has confirmed that it is in discussions over the acquisition of “a number of BMW dealerships” following speculation that Inchcape is set to sell a number of sites.

AM100 car retail groups Vertu and Jardine Motors Group are understood to be eyeing acquisitions from the Inchcape portfolio following speculation that the PLC is poised to dispose of its 13-site Cooper BMW operations.

In a statement issued via the London Stock Exchange this afternoon Vertu Motors, which currently operates 134 sales and aftersales outlets across the UK, said that it noted the recent press “speculation”, adding that it “confirms, as per the stated strategy of the company, that it is in discussions with a number of parties concerning the acquisition of a number of dealerships, including a small number of BMW dealerships”.

It said: “Any acquisitions would be funded from existing resources. Discussions are ongoing and there can be no certainty as to the outcome of the discussions.”

In discussion with AM this afternoon, a spokesperson for Inchcape insisted that the PLC “does not comment on speculation” when asked about the multiple potential site disposals.

Vertu Motors growth strategy will have been boosted immensely by a trading update published last week, which revealed that the group’s COVID-19 recovery had accelerated the AM100 PLC to a £19 million profit in Q2 to reverse a £14.3m Q1 loss and deliver an overall profit in a challenging period for automotive retail.

Reacting to a set of interim financial results in conversation with AM on October 7, chief executive Robert Forrester described how the sector’s momentum had grown in recent months, culminating in a strong September which he felt had been “a good time for all”.

Group chairman Andy Goss, meanwhile, said that "a strong balance sheet will allow a new period of expansion to commence", delivering a business of "greater scale".

At Inchcape, series of car dealership disposals over the past 14 months, meanwhile, were followed by news of a global cost reduction exercise targeting £90m in annualised savings for the retail and distribution business.

Back in August 2019 Inchcape Retail UK chief executive James Brearley denied plans to cut the group’s UK retail portfolio by around a fifth, branding the suggestion as “speculation”.

However, that month brought Inchcape’s disposal of seven sites to Group 1 Automotive and Motorline for a combined sum of £21m, which was followed by its £100m sale of Inchcape Fleet Solutions (IFS) to Toyota, last October. 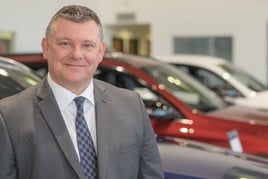 Speaking to AM in August, Inchcape Retail UK managing director, James Brearley, said that the group’s sale of its Tunbridge Wells BMW and Mini dealerships to Arden had come as part of a “strategic withdrawal from the South East and Kent”.

He said: “There were a few raised eyebrows when we started to sell some of the sites we did in the South East last year, but there were businesses down there that we were struggling to make money from.”