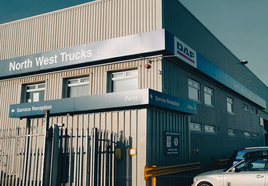 Greenhous Group has continued its growth in commercial vehicles with the acquisition of Heatons Truck Group.

Adding four more DAF locations to the £1.12 billion turnover, Telford-based AM100 retail group’s portfolio, the move follows the 2019 addition of £61 million turnover Adams Morey and Kingdon Wessex in 2021, taking its representation with the brand to 19 sites.

“For over 120 years the Heatons family have built a fantastic reputation and loyal customer-base in the region. It’s been a pleasure working with them on this deal and we’re looking forward to further prosperity in the North West.”

Founded in 1899, Heatons Truck Group is a fifth-generation family-run business with four sites throughout the North West of England.

It is comprised of: North West Trucks, a leading DAF franchise operating out of Northwich and Huyton; North West Truck & Trailer Parts, an all-makes commercial parts operation at Ellesmere Port; and Woodwards Truck and Van Centre in Wigan, which holds the parts and service franchises for both Renault and DAF Trucks.

With locations throughout the South West, South Coast, across the West Midlands and now the North West, Greenhous is one of the largest DAF dealer groups in the UK.

The business has said that its four new locations will remain trading under the North West Trucks name and will be overseen by Kevin Swinnerton, managing director of Adams Morey.

Swinnerton said: “I can’t wait to start working with everyone across the four locations – we’ve inherited a first-class team and outstanding network coverage in the region. We’ve a lot to learn from each other and an exciting journey ahead.”