Consumers have a misguided confidence in the reliability of German brand cars, according to research by WarrantyWise.

It asked more than 750 people who they thought were the most reliable manufacturers in the UK, with Mercedes, Audi and BMW all coming in the top 10.

However, its data shows those brands a lot further down the rankings, with scores that are ‘below average’.

An open-ended survey question asked users to pick from all manufacturers on sale in the UK, to identify which they believed were the most reliable.

Honda came out on top, followed by Toyota and Ford, with BMW in fourth place.

But according to WarrantyWise’s ‘dependability rating’, the public’s perception of BMW’s reliability is markedly different to the reality, with BMW placing 29th in a list of most reliable manufacturers.

Mercedes and Audi also placed in the public’s top 10 most reliable manufacturers, but finished well outside of the top 10 in WarrantyWise’s table, in 27th and 28th places respectively. Both had scores that are considered ‘below average.’

Each car manufacturer has been ranked by a dependability factor, based on the number of reported faults or breakdowns, with a score of 75 representing the UK average.

A rating above 75 is considered good, and below 60 signifies a high incidence of repair work is required.

Average costs, vehicle age and model are also considered in the Warrantywise ranking.

WarrantyWise also asked buyers which they believed to be the least reliable manufacturer in the UK, with Fiat, Vauxhall and Renault all in the top five most popular answers.

The reality is, though, both brands perform ‘above average’.

WarrantyWise chief executive Lawrence Whittaker said: “This research proves that you can’t go buying a car on reputation alone; many people will flock to certain brands and stay away from others but our data shows that those prejudices may actually be leading people in the wrong direction.” 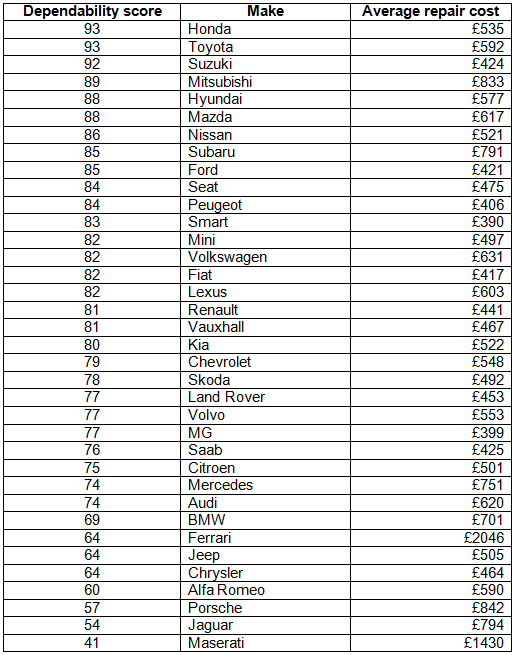