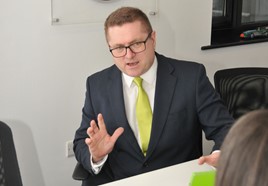 Motor retailers could be putting safety and revenue at risk due to lack of robust Vehicle Health Checks (VHCs) management, according to Coachworks Consulting.

Coachworks Consulting’s managing director, Karl Davis (pictured), said: “VHCs are a vital part of a dealer’s duty of care obligations, so not having robust workshop processes in place to ensure they are completed can put customers in jeopardy.

“It is alarming that some dealers are losing revenue opportunities by either not doing VHCs or failing to convert red work.

“Dealers need to ensure that red work estimates are issued as a matter of priority to gain authorisation whilst they have the car in the workshop. If this is not done then the customer could drive away an unroadworthy car and take it elsewhere to be repaired,” he said.

Davis said the best performing retailers target 100% VHC completion with many currently achieving in excess of 95% and this is reflected in high levels of aftersales profitability.

“What we are increasingly seeing is a polarity in performance so we are urging retailers and their OEM partners, who need to play a much more proactive role, to address the way VHCs are being managed in the workshop.”

Research by autoVHC found the average UK dealer failed to sell £87,600 worth of urgently required red work over a 12 month period, equating to lost sales of £429m across the UK’s 4,900-strong franchised dealer network.

Coachworks estimates that around 30% of vehicles passing through franchised workshops do not currently undergo a VHC and blames a lack of processes and poor management.

“When a vehicle enters a workshop, the retailer has a duty of care to undertake a VHC,” said Davis.

“However, some technicians are not prioritising VHCs because they are incentivised on hours sold. This means they are keen to process as many vehicles in a day as possible and see VHCs as a handbrake on their efficiency.

“In many cases this is compounded by their lack of confidence in the front-end team’s ability to sell red work.”

“We came up with the 45 Minute Rule more than a decade ago and it has helped turn around the financial performance and duty of care compliance of many workshops.

“In simple terms it means the first 15 minutes on the ramp are devoted to completion of the VHC, the next 15 minutes are spent generating the estimate and the final 15 minutes to securing authorisation for the technician to carry out work identified; ideally on the same day,” he said.

Coachworks maintains that franchised repairers are in an unrivalled position to offer best advice to customers about the condition of their vehicles in a timely, expert and value-added manner.

Davis said: “Retailers should be targeting authorisation levels of 75% on red work identified on the day. Workshops achieving this benchmark will consistently meet parts, accessories and retention aspirations and that could make all the difference to bottom lines in 2019.”