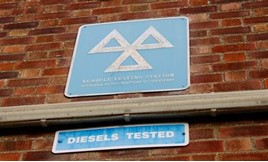 The Royal Burgh of Kirkcaldy has been revealed as the MoT failure capital of the UK, according to the Honest John consumer motoring website's analysis of Government data.

The Scottish coastal town has the lowest MoT pass rate in the country, with just 55% of the region’s 135,000 cars passing the MoT at the first attempt. Plymouth, Dundee and Truro also rank poorly, along with Exeter, Torquay and Hull.

The south east of England has the best MoT record in the Great Britain, with Enfield topping the table with a pass rate of 73.5%. Other towns that perform well include Bromley, Ilford, Romford and Croydon.

The Honest John team looked at Government MoT data covering every post code in England, Scotland and Wales, which was obtained from the DVSA (Driver and Vehicle Standards Agency) through the Government’s OpenData scheme and covers millions of MOT tests.

The research also show that the most common reasons for MOT failure relate to defects with vehicle lighting, brakes, tyres and suspension.

HonestJohn.co.uk’s managing editor Daniel Powell said: “One of the most surprising aspects to come out of The MOT Files is the amount of regional variations. Harsher road and weather conditions will inevitably put more pressure on a car’s mechanical components and motorists can use the MOT Files to ensure their vehicle is not failing on something that can be easily fixed beforehand.”

Other reasons for regional variations may include higher average mileages in rural areas, and a higher fail rate in areas with traditionally lower incomes, he said.