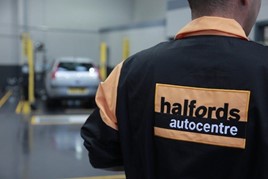 Halfords reports that sales at its workshop chain, Autocentres, rose 2.2% to £161.4 million in the 12 months to Mar 29, reflecting growth in its provision of servicing, tyres and MOT.

It said its Autocentres transformation plan is continuing, leading to the division’s second year of profit growth. Underlying EBITDA rose 5.7% to £11.1m

One Autocentre was closed during the year, and two others opened, taking the network to 317 locations. Like for like revenue growth was 2.6%.

Halfords revealed last autumn that its medium term plan is to open more than 100 extra workshops, and roll out mobile vans in major conurbations, where its research has shown there is strong demand from 20-35 year olds. Three ‘Halfords Mobile Expert’ vans are already on the roads, providing 12 services from batteries, tyres, air-con service to windscreen chip repair.

Existing workshops would be refurbished on an ongoing programme of up to 50 per year, it revealed last autumn.

But after a hit to group profitability, Halfords is now scaling back on those ambitions, AM understands, and is implementing cost and efficiency initiatives to underpin profit growth.

The group continues to also offer fitting at its retail stores with success. Halfords said this week: “Group service-related sales, which consist of the revenue generated from paid fitting and repair services plus the associated product attached to the transaction, continue to be in growth in the year.

“The number of service jobs completed increased by 4% in the period, with service-related sales now accounting for 24% of the overall group sales,” said its statement.

Of the batteries, bulbs and wiper blades sold at its retail stores, 42% were also fitted by staff. However, sales of such items in its stores declined.

“This continues to reflect the increasing relevant of our services proposition to the growing proportion of ‘do-it-for-me’ customers. The number of on-demand services available in retail stores increased to 80 in the year, from 30 in FY17, with the trial of on-demand services delivering promising results in Autocentres,” said chief executive Graham Stapleton.

With rising relevance of electric and hybrid technology, more than 500 of its Autocentre technicians have now been accredited to IMI Level 2 standard in Hybrid Electric Vehicle Operation and Maintenance, it said.

While at its stores, sales of electric bikes have growth 47.2% year-on-year and now represent 11% of total bike sales across the group.

The Autocentre network will also trial servicing of electric bikes.

It said: “Halfords will be the nationwide go-to provider for electric bike and car servicing.”

Halfords looks to 'move up a gear' with new marketing campaign

Halfords looks to 'move up a gear' with new marketing campaign