European new-car sales in November saw the 27th consecutive month of growth with volumes up 13.5%, the second highest this year.

This followed a significant slowing in growth during October as a consequence of smaller increases coming from the ‘big five’ EU markets.

Last month the total market expanded to 1.13 million cars from 993,000 units registered in the same month of 2014 taking the year-to-date result to 13.06 million units.

Most of the markets analysed by JATO Dynamics showed positive signs in November, with 27 of the 29 countries posting an increase in sales and 21 of them posting double-digit increases.

The growth was driven largely by Spain and Italy, where registrations increased by 26% and 24%, respectively, while in France the total was up by 11% to 150,000 units, offsetting smaller increases in Germany and the UK.

However, these two markets performed better than the figures seen in October, as Germany increased by 9%, and the UK new-car market returned to growth with a 4% year-on-year increase.

The Czech Republic, Poland, Finland, the Netherlands, Belgium and Sweden are among the big winners during November as their registrations increased by more than 20% year-on-year.

Moving in the opposite direction were Luxembourg and Estonia, the only two markets to post a decline in sales last month.

“After the slowdown seen in October, the European new-car market is back to a healthy increase of 13% that benefited the majority of brands.

In November the Volkswagen brand led the market but posted the lowest increase in the top 10 with only a 3.3% gain over the same month of 2014.

It was followed by a strong performance from Renault, Ford and Opel/Vauxhall, which sold between 75,000 and 80,000 units each.

Double-digit growth was also seen by volume brands Peugeot, Fiat and Skoda, while the premium brands were led by Mercedes, with registrations up by 18% - quite ahead of the growth posted by its rivals.

Outside the top 10, other brands that showed a significant increase included Jaguar, Smart, Land Rover, Jeep and Mazda.

The ranking by model shows that the Volkswagen Passat was again the fastest growing model in the top 10.

It helped the brand to offset the decline of the Polo and the smaller increase posted by the Golf.

The long-standing European leader had the smallest positive change among the models composing the top 10.

The Renault Clio occupied third position outselling the Ford Fiesta by more than one thousand units, but it was the Opel/Vauxhall Corsa and the Peugeot 208, the subcompacts, that grew faster with sales gains of 18% and 23%, respectively.

The top 10 comprised of five subcompacts, three compacts, one mid-size sedan/SW and one SUV/crossover.

The Renault Kadjar, Hyundai Tucson and Mercedes GLC were the best-selling new entries.

“Overall November was a strong month with the usual leaders keeping their positions, while the new launches helped boost sales.

“The growing demand is heading us to a strong full-year result that is benefiting specific segments such as the SUV,” said Walters. 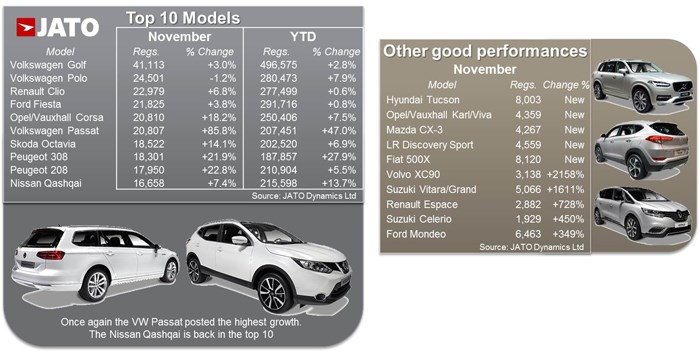