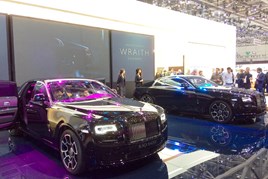 Rolls-Royce Motor Cars is eyeing a eighth UK dealership site as it taps into a new, well-heeled young audience to continue its sales growth.

Speaking to AM at the Geneva Motor Show, James Crichton, the ultra-premium brand’s regional director for Europe and South Africa, revealed that the average age of a Rolls-Royce customer has dropped from 55 to 45 since the launch of the Ghost in 2009.

And as the company unveiled more driver-focussed Black Badge versions of the Ghost and Wraith coupe at Geneva, he said that the young market was helping to generate impressive growth for the Goodwood-based brand.

Crichton said: “We have come from a brand selling 1,000 cars a year to selling 3,500 to 4,000 cars a year and that is demand from a younger audience, both overseas and here in the UK.

“A new dealership will be opening at the Cribbs Causeway in Bristol this summer, which we are very excited about, and that will take us to seven dealerships and I see that, going forward, we might need an eighth.”

Crichton said that potential open points were being looked at, including Yorkshire’s Golden Triangle, between Leeds, York and Harrogate.

A strict set of criteria must be met by potential applicants, with an ability to network among the region’s elite and an ability to offer customers a bespoke service both key considerations, Crichton said.

The reward is a business that promises dealers opportunities to upsell with various options – an average of £30,000-per-car – and a growing aftersales business.

Crichton said: “Aftersales is growing 15 to 20% a year as the car parc grows. It’s a very profitable business model.”

Another area of growth is finance, said Crichton, who introduced the Rolls-Royce Motor Cars Finance Service to the UK two years ago.

He said: “More and more owners are buying the Rolls-Royce on finance, not because they have to, but because it makes sense. Last year we saw a doubling of that business year-on-year.”

Elsewhere, an array of changes aiming to achieve a more dynamic appeal.

The Ghost and Wraith also get a power hike in Black Badge guise, meanwhile, the Ghost delivering 603bhp and 620lb-ft and the Wraith 623bhp and 642lb-ft.

The introduction of the new Black Badge models follows Rolls-Royces’ announcement that the Phantom will cease production this year.

A new version, featuring an all-aluminium chassis, is expected in 2018 but Coupe and Drophead Coupe versions of the model will not be replaced.