Despite the traditional dip in sales across Europe, driven by February preceding the March plate change in the UK, registrations remained stable in February.

The month’s increase was more than double the rise posted in January 2016, and six per cent higher than the growth seen in February 2015 when compared to February 2014.

This is largely down to strong Italian sales, and double-digit growth in Germany, France and Spain. 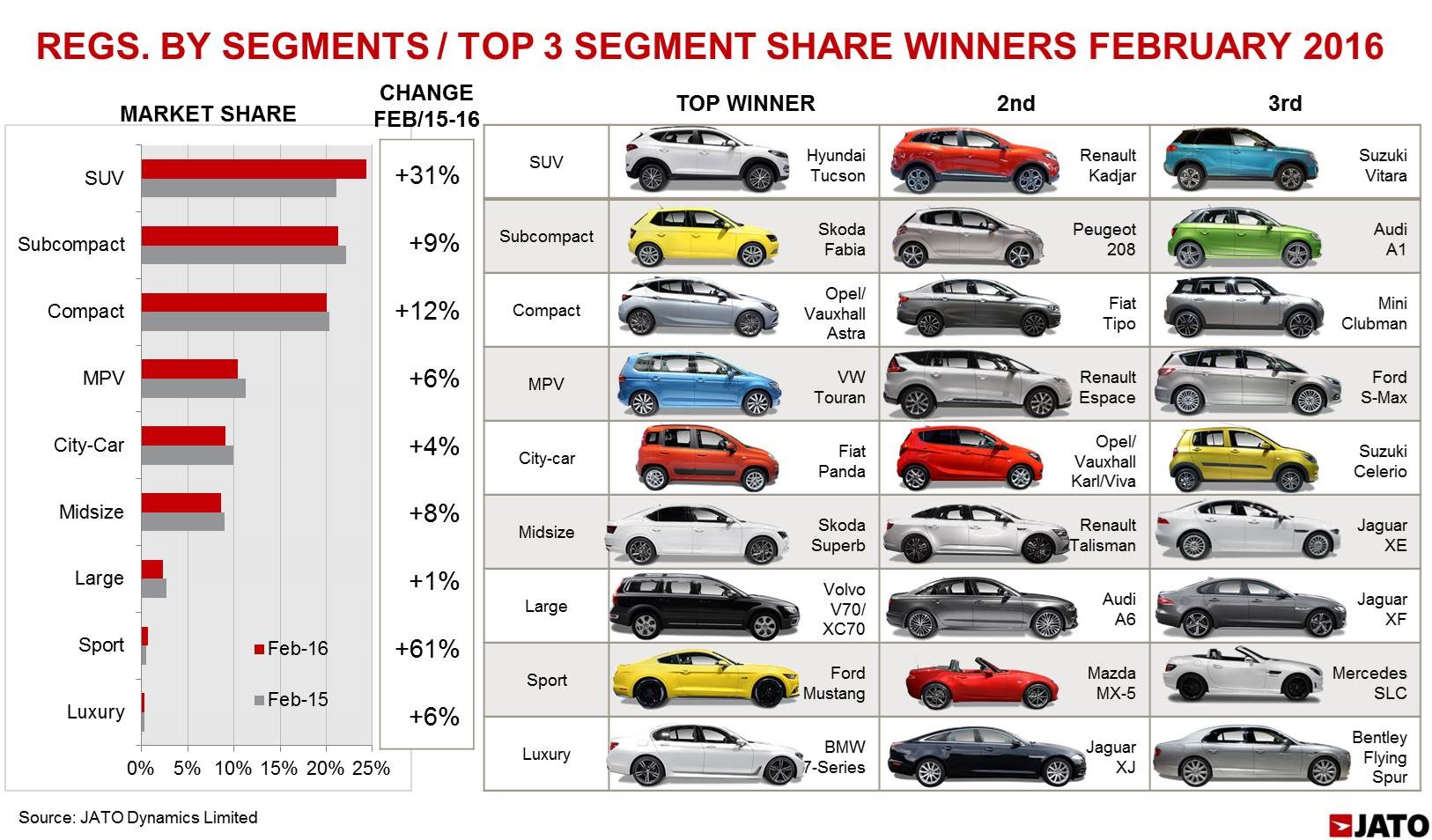 However, the brand continued to underperform when compared to the overall market, with year on year growth of just 4%.

This was the lowest increase among the top 10 best-selling brands, and the third lowest within the top 20.

All of its closest rivals posted double-digit growth, with Ford, Peugeot and Opel/Vauxhall outperforming the market average. Fiat occupied sixth position, outselling the German premium brands due to outstanding growth of 24%.

Most of this came from its Italian operations (+36%), which counted for 61% of its total.

“Despite the strong growth seen in most of the big markets, Volkswagen wasn’t able to tap into growing consumer demand to the same extent as its rivals, who took advantage to claim a bigger share of the market,” said Felipe Munoz, global automotive analyst at JATO Dynamics.

The Volkswagen Golf continued to be Europe’s best-selling car, with registrations totalling 36,100 units, a marginal increase of 1% from February 2015.

In February 2014 the Golf’s market share was 3.88%. Part of the reason for this decrease was the rising demand for the new Opel/Vauxhall Astra, which benefited from sales growing in Germany (+45%), Italy (+27%), and an exceptional rise in France (+167%).

Other compacts which gained share included the Peugeot 308, Toyota Auris and Mercedes A-Class.

Second and third places were occupied by the Volkswagen Polo (+6%) and Renault Clio (0%) respectively, both of which lost market share.

The French subcompact outsold the Ford Fiesta, thanks to impressive growth in France, Italy and Spain.

The biggest year-on-year percentage increase in the top 10 was posted by the Fiat Panda, which took seventh position, behind the Opel/Vauxhall Corsa.

As usual, a significant portion of the volumes registered by the Italian city-car came from its home market (78% of the total), where its sales increased by 51%.

The Panda’s increase was the second highest among the top 20, after the 49% rise recorded by the Skoda Fabia (in 19th position).

Completing the top 10 were the Skoda Octavia, Nissan Qashqai and the Peugeot 308, with only the last one gaining market share.

Opel/Vauxhall’s Astra and Volkswagen’s Passat almost reached the top 10, while the Renault Captur kept its place as the second best-selling SUV – though with 16,500 units sold, and total growth at 11%, it underperformed in comparison to the rest of the market.

These were followed by the Ford Focus, Audi A3 and Toyota Yaris, all of them with single-digit growth, while the Peugeot 2008 finished in 18th place, up by 15%.

The Opel/Vauxhall Mokka and Fiat 500 were the only two models of the top 20 to see sales decline.

For the second month in a row, the new Hyundai Tucson was Europe’s best performer in terms of market share gain.

The Korean compact SUV was the 24th best-selling car in Europe and second-placed C-SUV, ahead of the Volkswagen Tiguan and Renault’s Kadjar - the second best improver in terms of market share.

“The trend is clear. The European new-car market double-digit growth rate is being driven by the SUV boom.

“As mainstream and premium car makers update their compact and large SUVs, their sales are expected to keep on growing”, said Munoz. 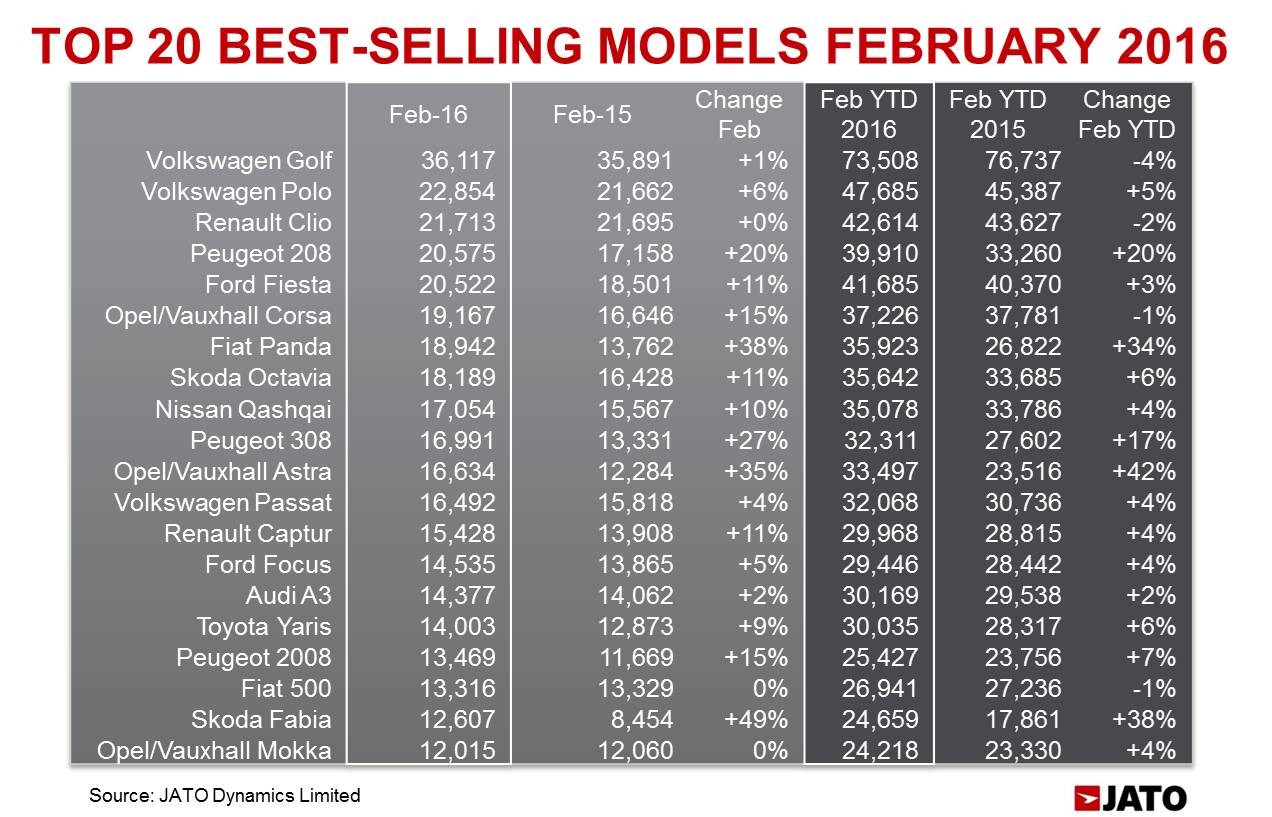