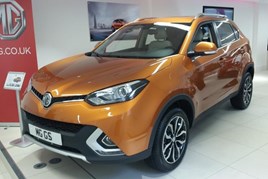 MG Motor UK is making its first use of augmented reality to give consumers a preview of its forthcoming SUV, the MG GS.

The car brand will be utilising its augmented reality kits this weekend on its displays at the Gadget Show in Birmingham and at the first race in the British Touring Car Championship at Brands Hatch.

Matthew Cheyne, head of sales and marketing for MG, said: “We are really excited about using augmented reality to bring the GS to life. Before customers can get their hands on the real thing, we want to submerge them in a virtual environment and what better way to launch this than at the Gadget Show.

“The kit we’re using is great and really allows you to explore the GS. You can open doors, fold down seats, open the boot and walk around it. When you’ve got the headset on, it recognises where you’re moving and updates the image in front of you, it’s so clever.”