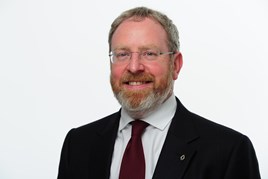 Renault dealers will benefit from a focus on “stability” as they juggle the requirements of an expanding range and the demands of growing sales, according to Groupe Renult UK MD Paul Flanagan.

Flanagan took up his post on May 1 and finds himself at the helm of a brand which is celebrating after achieving a 21% year-on-year sales rise (44,570) in H1 of this year and a wealth of new product leaving it poised to embrace further growth.

The Renault network is also the current holder of AM’s coveted Franchise of the Year accolade.

Asked whether the prospect of entering a business which is enjoying a period success means he is under more pressure to drive further gains in an interview with AM this week, Flanagan was sure of his role at the brand.

He said: “I don’t think the pressure is more or less. I’ve done lots of jobs in my life where I have come in with a requirement to implement change, but here the focus is very much on stability.”

“Because we have had 130% growth over the last three years some of our existing retailers are reaching capacity and that is a primary concern, but we want to accommodate the throughput without big investment from our partners.

“We believe we have the biggest throughput of all the generalists – perhaps with the exception of Volkswagen – but we are looking at ways of allowing our retailers to accommodate that with minimal cost implications.

“I have told dealers that if the lead times on servicing grow too large, for example, that it’s imperative that they work to change that, whether that’s through one-hour servicing or mobile servicing. We have to be innovative and look at all the options before big investments are made in bricks and mortar.”

Despite the need for stability, Flanagan conceded that Renault would need more retailers as it pursued its growth plans, with the Dacia network primed for more throughput with new product on the horizon.

The 170-strong network, which has expanded with the addition of 19 outlets last year and 13 so far this year, is currently realising 1.6% RoS, which Flanagan described as “a good level”.

Flanagan conceded that the simple logistics of fitting Renault’s expanding range into dealerships had become a key consideration.

The range has also expanded in recent times with the addition of the big-selling Kadjar SUV – which has added 10,619 conquest sales for UK dealership in H1 of 2016 – and will soon see the introduction of the new Koleos SUV.

Nine UK dealers will also have to make showroom space for the Alpine sports car brand when Renault revives its performance arm in 2017.

Flanagan said: “In truth, you might struggle to accommodate all the new models we will have launched in the past year alone in a showroom, let alone the rest of the range.

“We will have to be pragmatic about how many vehicles we send to dealers, how many they have on display and available for test drives, but as the growth takes hold my main concern is supplying our partners with enough vehicles to sell. At the moment I’ll take all the vehicles I can.”

This month’s new car launch, the Megane hatchback, will provide another sales boost to Renault dealerships, but Flanagan would not speak about the vehicles sales expectations other than to say that 50% will be accounted for by the fleet market.

The mid-range Dynamique Nav dCi 110 is expected to be the range’s biggest seller, boasting 76.4mpg fuel economy on the combined cycle, 96g/km CO2 emissions and RVs (36months/60k mikes) of 31% - up 7% on the outgoing model.

Flanagan said: “Obviously we have seen the C-segment move towards SUVs – a trend we have benefitted from – but the bulk of sales are still in the more conventional hatchback-style and the new Megane is well-placed to take advantage.”