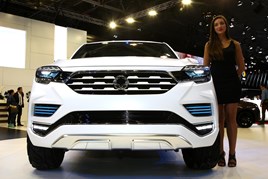 SsangYong UK is on a charge thanks to the success of its Tivoli crossover SUV, and there is more to come, according to managing director Paul Williams.

Tivoli’s launch helped the Korean brand to double its registrations to 3,344 units in 2015, and its 2016 performance is currently tracking 52% ahead year-on-year.

Williams said SsangYong’s reputation and awareness is growing – at motor shows and events it is having to explain less who it is and where it has come from. “As we’ve built it’s also allowing us to attract new dealers,” he added.

Its new franchising manager Steve Prew has already had an impact, Williams said, and has been talking with a few regional dealer groups who’ve been left with a secondary site after being required to relocate by another brand’s franchise standards.

“Because we have relatively modest in what we need in terms of showroom accommodation, if they have a good used car operation there they can make it work,” he said.

“Some of the people we’re talking to now, when they see our September sales results they will be encouraged and given an extra boost of confidence that they’re making the right decision.”

A recent recruit was Desira Group in Norfolk, which has added the franchise into a former Jeep showroom which is also home to a group used car operation.

“Being involved with Desira or some groups of that size is a different proposition, and that’s good for us because it raises the stock of the network generally and acts as a catalyst for improvements we’re making in products, network, organisation, systems and training,” he said.

SsangYong UK is about to launch IMI-accredited leadership development training modules for the dealer principals in its network, and is set to become an IMI accredited training centre.

This is in preparation for further volume growth – over time Williams wants the brand to reach 10,000 annual sales.

He described Tivoli as SsangYong’s mass-market product and added that to make progress and take maximum advantage of it requires a full skillset, being good at F&I, used car operations, add-ons, and working capital controls.

New launches of the Musso pick-up this autumn and a replacement Rexton in 2017 will contribute to the growth.

Sticker prices will increase, but improvements in quality and equipment mean SsangYong cars will still be great value, said Williams.