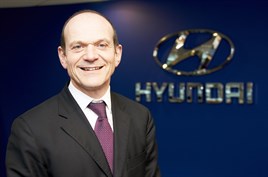 A “young network” is affecting Hyundai’s return on sale figures but a wave of new product and a new marketing strategy will help boost dealer fortunes, says president and chief executive Tony Whitehorn.

Speaking to AM at this week’s launch of the new Ioniq, the market’s first vehicle to be offered with a range of three AFV drivetrain options, Whitehorn said that the brand’s network of 157 dealers had seen their RoS fall back to 1% at the end of August – a fall of 0.1% year on year.

He described a resulting 6.4 overall score (against a 6.7 industry average) in the NFDA’s summer dealer satisfaction survey as “middle of the road when compared to our competitors” but said new product and changes to the marketing of the brand would all bring results for dealers.

He said: “Since 2009 we have changed 70% of our network. It’s a very young network and, consequently, many of our partners don’t have the established customer base that you might find in other brands.

“This is something that is evolving all the time and with greater volumes of used vehicles coming back into the sites and customer databases growing, making profits should become easier.

“What we are seeing is that the dealers that have been with us longer are making good money. I’d say that 25% of our network achieves over 2% return on sale.”

Whitehorn said that a meeting with Hyundai’s dealer council last week had sought to clear the air following the NFDA survey results and discuss changes that would benefit dealers. He said: “We clearly had an issue and there’s no point doing anything other than discussing it and trying to put things right.”

One area at which dealers voiced their frustration was a perceived lack of advertising activity.

Whitehorn said that much of Hyundai’s marketing activity had moved online and described the process of getting results as “a slow burn”, but added that a new marketing campaign based around the values of innovation and dynamism would accompany a new range of product through 2017.

He said that the Ioniq would deliver the innovation element of the plan with a high performance i30N model ushering in the dynamism element in 2017 and new i10 and i30 hatchbacks also coming in the new year.

The premium Genesis brand is also set to be introduced to the UK by Hyundai in 2018.

Whitehorn said: “Historically we have been very product-focussed in terms of our marketing. From now on we’ll be more thematically driven and the hope is that this will make the brand more desirable and aspirational.

“Particularly with the Ioniq and i30N there is the scope to attract a whole new set of customers to the brand and we have to be excited about that.”

He added: “I think, with Hyundai, there exists a level of expectation in terms of success and profits now that dealers are finding hard to equate when they look at the results they are seeing, but I think that is going to change.

“I fully expect the market to be flat next year – I don’t see a dip, as such – but I think we have the product and the strategy to ensure that we will still see some growth.”

Whitehorn said that the market had failed to “fall off a cliff” as many had predicted following the Brexit vote.

But he said that 4% growth to January had slowed to around 1% in the last quarter.

Strikes in the Korean factories of Hyundai and sister company Kia had not affected supply to the UK, Whitehorn claimed.

And while he would not comment on next year’s rumoured fall in the overall UK markets registration in the region of 6% to 9%, Whitehorn said: “Our target for the year was 92,000 units and we’ll end the year above that. September was a record month for us, we registered 17,000 vehicles.

“We are already starting to end our reliance on the rental market and see ourselves as being in a good position.

“At the end of the day we are not a manufacturer playing catch up. We are selling large numbers of cars and introducing a lot of new product. I think that’s a good position to be in.”