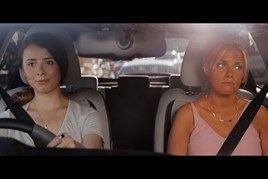 Toyota has launched an all-new version of its “Treat it with Respect” television adverts to promote the Yaris hatchback – six years after the slogan’s last outing.

The adverts – which will be screened from October 10th and represent a £3m investment by the brand – see Yaris drivers’ love for their cars lead to comic consequences for their friends and family.

Supergrass star Gaz Coombes last featured in a Yaris advert featuring the “Treat it with Respect” tagline back in 2010.

The new ad, created for Toyota GB by Saatchi and Saatchi, depicts a comic situation between a Yaris owner and a friends tanning calamity.

Andrew Cullis, Toyota GB marketing director, said: “Yaris is well-established as our best-selling model in the UK and we wanted to capture the strong pride it generates with owners in a fun scenario that people will instantly identify with.

“Our recent Yaris campaigns have focused on the hybrid model – our unique offering in the small hatch market – but our intention now is to promote the excellent qualities of Yaris. This covers aspects such as the car’s style and enjoyable drive.”

Toyota’s Yaris advertising campaign will be screened across multiple terrestrial and satellite channels and will continue across the next month on TV, OOH, digital and social media.