Peugeot’s brace of new SUVs made an impressive public debut under the spotlights of the Paris Motor Show – ahead of an early 2017 arrival in UK showrooms. 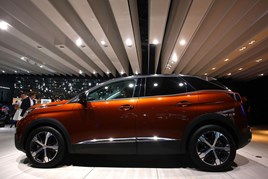 Seeking to cash in on growing demand for more rugged vehicles across all segments, the French brand has moved its 3008 (left) and seven-seat 5008 (below) models away from their original MPV form to hone in on the market’s growth area. 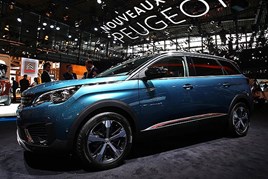 https://www.am-online.com/admin/webpage/edit/90502The system uses “a customisable 12.3-inch, high-resolution digital screen with contemporary graphics”, according to Peugeot. An eight-inch touchscreen in the centre of the dashboard brings together climate controls with access to connectivity and infotainment options. It supports smartphones via the MirrorLink and Apple CarPlay systems.

Prices for the 3008 and 5008 have yet to be announced, but 3008 order books open this month ahead of January deliveries. The 5008 reaches showrooms next spring.

Trim levels will start with Active – the less-equipped Access trim has been ditched for this market – and also features Allure, GT Line and a performance-focused GT trim.

Jaguar Land Rover unveiled its new Discovery simultaneously in Paris and at a glamorous event in the grounds of Packington Hall, Warwickshire. 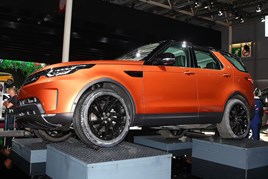 Jeremy Hicks, JLR UK’s managing director, was in the UK for the event, at which it broke the record for a Lego structure, a model of Tower Bridge featuring more than six million pieces.

Hicks said UK demand for the seven-seat Discovery had “always been strong”:

“Our retailers have been really excited to start talking about it. Customer interest has exceeded all expectations already, with a strong mix of new customers interested in the brand.”

JLR expects to attract more fleet customers to the Discovery, thanks to its Ingenium 2.0-litre engines, which emit from 99g/km of CO2.

The fifth-generation Discovery goes on sale in spring, priced from £43,495.

It will launch with a limited-run ‘First Edition’ model. A unique etched map detailing on the aluminium trim for the doors and fascia, unique badges, bold colour choices and a comprehensive list of standard equipment are standard on the 600 vehicles that will be made available to customers in the UK.

The new C-HR allows Toyota to go head-to-head against the likes of Nissan’s Juke and the Honda HR-V, with an edgy design looking to target a younger customer. 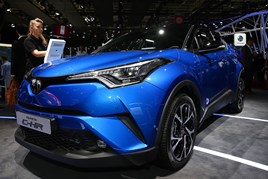 Lining up on the Paris stand alongside the new plug-in Prius hybrid, the C-HR (an acronym for Coupé High-Rider) is, according to Toyota, the “realisation of efforts by Toyota designers’ to create a stand-out style and establish a new direction among mid-sized crossovers”.

A spokesman said Toyota was targeting “people who are predominantly driven by emotional considerations” with the newcomer.

The Toyota C-HR goes without the option of diesel power and will be offered as a hybrid or with a 1.2-litre turbocharged petrol engine.

The hybrid features a 1.8-litre petrol engine and delivers a maximum output of 122PS, with claimed CO2 emissions of 82g/km and combined fuel consumption of 78.5mpg.

A 576-watt JBL stereo has also been developed for the C-HR.

Dale Wyatt, Suzuki GB’s sales and marketing director, told AM the brand aims to “define a new segment” with the new Ignis. 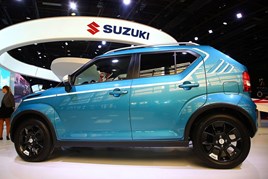 The A-segment SUV remained fairly true to the Ignis Trail Concept showcased at the Tokyo Motor Show in 2015.

Scheduled to go on sale in the UK in January, the Ignis features the brand’s SHVS (Smart Hybrid Vehicle by Suzuki) system employed by the 1.2-litre Dualjet engine to help deliver performance and fuel economy.

Wyatt said: “This is an exciting new car that really gives us the chance to lead the way with an A-Segment SUV. We can really define a new segment with the Ignis. There’s nothing else quite like it currently out there.”

Despite a “ground-up” reworking, Audi’s new Q5 (arriving at Audi Centres in spring) features only subtle revisions to its exterior styling. However, there is a more defined update under the skin, where Audi claims a kerb weight 90kg lighter than its predecessor and an additional 10 litres of boot space (to between 560 and 610 litres). 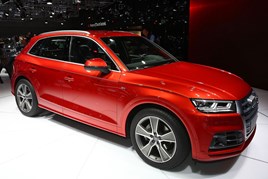 Rupert Stadler, chairman of the board of management at Audi AG, said: “With the new Q5, we are setting the bar a notch higher.”

A Wi-Fi hotspot also allows passengers to get online with up to eight mobile devices.

Audi’s new Q5 will be available with the choice of a 190PS two-litre TDI or 252PS TFSI turbocharged petrol engines.

Details issued ahead of the Paris Motor Show suggest that the petrol engine will achieve 41.5mpg combined fuel economy and 154g/km CO2 emissions.

A 286PS three-litre TDI turbodiesel engine will be added later.

Nissan has set its sights on the established players in the B-segment hatchback market, with the sportier and more technology-packed Micra unveiled in Paris. 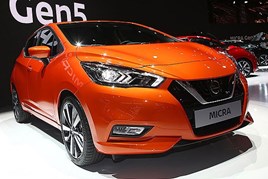 Lower and wider than any previous Micra, the fifth generation of the Fiesta rival promises to be more dynamic than its predecessors and can be customised with an array of optional decals and an optional Bose stereo system.

Martin Boutard, Micra product manager, told AM the new model is geared towards a younger, more mainstream audience. He said: “This is the start of a new era for Micra.

“The Bose stereo option is something that I’m especially excited about. There are speakers in the headrests of the front seats and the sound quality is outstanding.”

Nissan’s Intelligent Mobility technologies are represented in the form of lane departure prevention and intelligent emergency braking, with pedestrian recognition – a first for Nissan vehicles in Europe.

From launch, next spring, the Micra will be offered with a 0.9-litre turbocharged three-cylinder petrol engine or a 1.5-litre diesel, both 90PS.

The South Korean carmaker   debuted a sharper new look for the latest iteration of its global best-seller, the Rio. 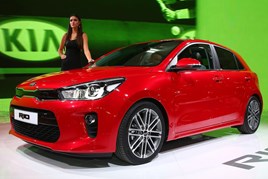 Speaking to AM at the show, Kia UK’s managing director, Paul Philpott, said: “We’re really pleased with the new car we have on display out there. It’s a more focused car and the interior is fantastic – a real step forward.”

The new Rio’s interior features a ‘floating’ HMI (human-machine interface), which declutters the interior and includes a high-resolution touchscreen that provides access to the Rio’s audio, navigation and connectivity systems.

Hyundai’s design chief, Peter Schreyer, hailed the brand’s new i30 hatchback as a “car for everyone” ahead of its Paris unveiling. 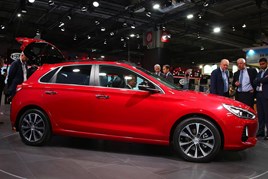 Schreyer, president and chief design officer of Hyundai Motor Group, said the brand had “focused on a wide range of different people” while developing the i30 design, which features “natural flowing lines, refined surfaces and a sculpted body to create a timeless appearance”.

A premium audio system, with a five-inch touchscreen and integrated dynamic rear-view camera, Bluetooth connectivity and My Music

functionality is standard with an  eight-inch touchscreen featuring Apple CarPlay and Android Auto available as an option.

After breaking cover as a very similar concept at this year’s Geneva Motor Show, the new Honda Civic was officially unveiled in Paris. 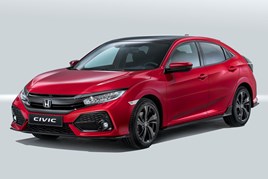 Joined on Honda’s stand by a prototype of the next-generation Type-R hot hatch, the 10th-generation Civic will be available with a one-litre three cylinder or 1.5-litre four-cylinder petrol engine from March.

A lower roofline and wider stance give the car an aggressive look, but clever packaging conceals 478 litres of boot space.

Katsushi Inoue, president and chief operating officer of Honda Motor Europe, said: “The market has become more competitive. From early development, we realised the 10th generation had to be a big step forward.”

Honda invested £200 million at its Swindon manufacturing plant to support production of the new Civic.

The Citroën C3 made a colourful entrance at its home show with a stand dominated by various versions of the infinitely customisable hatchback. 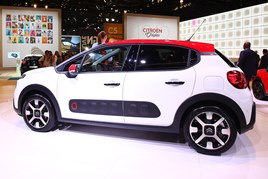 With styling that mimics the distinctive Cactus crossover, the C3 features the same scratch-resistant Airbump side panels, elevated daytime running lights and the option of nine body colours and three contrasting roof colours.

While 3cm lower than the outgoing C3, the 3.99m-long, five-door new model is said to feature 2cm of extra shoulder room and a 300-litre boot. 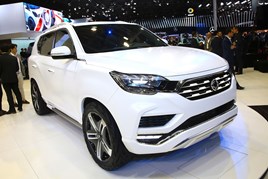 SsangYong unveiled its new design language in the form of a flagship SUV.

A development of the LIV-1 concept showcased at the Seoul Motor Show in 2013, the LIV-2 is expected to form the basis of a Rexton seven-seat SUV that will reach dealerships next year.

Its ‘chauffeur-driven’ concept places the emphasis on the rear seat passengers, with a fully connected centre console featuring a 9.2-inch monitor in addition to a pair of 10.1-inch monitors in each headrest. 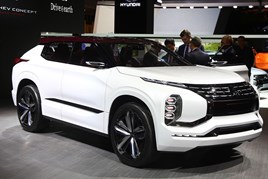 Effortless cruising on and off the beaten track formed the basis of a Mitsubishi PHEV concept, which showed the direction of the brand’s ambitions to follow the success of its plug-in Outlander.

A “dynamic shield” front grille was said to symbolise the advanced performance of a newly developed PHEV system based around a 2.5-litre petrol engine and a trio of electric motors.

Mitsubishi claims the GT PHEV would be able to return an electric-only range of 75 miles and a total cruising range of more than 750 miles, with CO2 emissions of less than 26g/km. 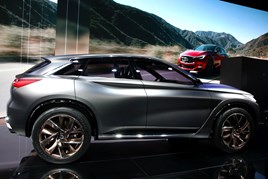 The world’s first production-ready variable compression ratio engine claims to combine the power of a high-performance two-litre turbocharged petrol engine and the torque and efficiency of an advanced diesel powertrain.

Roland Krueger, president of Infiniti Motor Company, described the 272PS VC-Turbo as “a leap forward for engine development”. He said  it would be brought to market in 2018. 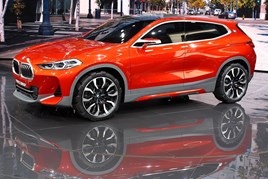 BMW gave a glimpse of a crossover variant that could expand its ‘X’ range.

Said to draw on the German brand’s history of coupé-making, BMW described the X2 as “a compact concept exuding urban sporting appeal”.

No details of the X2 Concept’s specification have been published, but Karim Habib, head of BMW Design, said: “This is a sporty vehicle with a bold character, and it allows us to open up some fascinating new design possibilities for the BMW brand.” 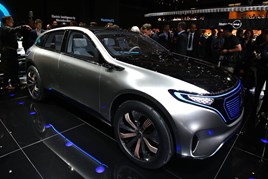 Mercedes-Benz’s sporty SUV gave an insight into the appearance and technology that may feature in the brand’s future range of EVs.

Capable of 0-62mph in less than five seconds and with a claimed range of up to 311 miles, the EQ’s scalable 300kW electric drivetrain could be tailored to future models.

Its aerodynamic traits were boosted by concealed windscreen wipers, cameras instead of exterior mirrors and an absence of conventional door handles. 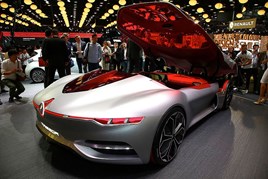 An electric powertrain developed through Renault’s involvement in Formula E racing inspired the brand’s 350PS Trezor coupé, which is said to be capable of 0-62mph in less than four seconds.

Just 1.08m tall, drivers enter the Trezor through a clamshell roof before they are offered the option of autonomous progress thanks to Renault’s Multi-Sense system.