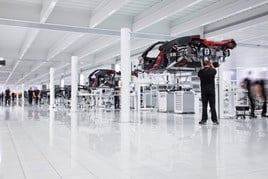 McLaren Technology Group and McLaren Automotive have merged to form the McLaren Group after former chairman Ron Dennis sold his share in the business for £275 million.

The announcement follows the decision of Ron Dennis CBE to step down as the chairman of McLaren Automotive and McLaren Technology Group, following 37 years at the helm of the brand, after reaching agreement with his fellow shareholders to sell his shareholdings in both companies.

The TAG Group first invested in McLaren in 1984 and is the longest standing of the McLaren Group’s shareholders.

They were joined ten years ago by the Bahrain Mumtalakat Holding Company. Both remain “committed to McLaren and excited for its next phase of growth”, according to a statement issued by the McLaren Group.

Mansour Ojjeh said: “Since I became a major investor in the business 33 years ago, I am exceptionally proud of what each of our extraordinary McLaren businesses have achieved, growing independently and entrepreneurially.

“Now, as they have reached world-class scale and success, it is the right next step to unify the strategies and brands to create a stronger centre of Luxury Automotive, Racing and Technological excellence.”

Earlier this year McLaren’s executive director of global sales and marketing, Jolyon Nash, told AM that the brand anticipated growing its UK dealer representation from six to eight sites.

Nash said: “Last year we fulfilled our goal of achieving almost 100% growth in sales and this year we anticipate we will close-in on 4,000 sales, which is a further 20% rise. That’s not inconsiderable.

“The growth has shown that there are places where we could accommodate new franchises and we currently have two open points which we are exploring in the UK. We are hopeful of adding dealerships in the North of London and the North East.”