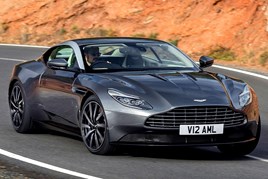 Car manufacturing chiefs have told ministers that a no-deal Brexit would create a trading climate that could prove “semi-catastrophic” to their businesses.

The potential toll of a stalemate in talks between British and EU diplomats was laid bare as SMMT chief executive Mike Hawes was joined by Aston Martin finance chief Mark Wilson and Patrick Keating, Honda Motor Europe's government affairs manager to give evidence to the Business Select Committee yesterday.

Wilson revealed that Aston Martin may have to halt production if the UK fails to strike a Brexit deal.

Without a UK-EU deal, that validity of the sports car manufacturer’s Vehicle Certification Agency (VCA) approval, which is valid in the EU, would cease for new cars from March 2019, resulting in what Wilson described as "semi-catastrophic effect of having to stop production".

He said: "Recertifying to a new type of approval, be that federal US, Chinese or even retrospectively applying to use the EU approval, would mean us stopping our production."

Vehicle certification is equally important for European carmakers wanting to sell cars in the UK.

Hawes told the committee that around 70% vehicles sold in the UK come from the EU, adding that, in the event of a no-deal scenario, the public could see price increases of around £1,500 per vehicle, as World Trade Organisation rules apply a 10% tariff.

Addressing Honda’s concerns to the committee, Keating said Honda imported two million components every day from Europe on 350 trucks and had just one hour of stock on its shelves.

Hawes called for Brexit negotiators to prioritise a "cumulation" agreement with the EU.

Such a deal would allow EU content to count as being of UK origin and vice versa - but would need to be part of the Brexit trade deal.