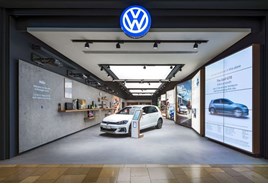 Volkswagen has denied plans to reduce the number of dealer locations in its UK network as part of a “future sales model” strategy.

Juergen Stackmann, member of the board of management Volkswagen brand for sales, marketing and aftersales, told Reuters that a network consolidation plan across Europe has been in operation for years and “it will surely accelerate somewhat in the next one, two years, also in Germany”.

The Reuters interview said that the reduction in dealer numbers was in reaction to “adjusting buying habits” as well as investing in a direct online sales portal and new electric car technology.

However, a spokesman for Volkswagen told AM: “We have 190 retailers and we have no plans to amend that figure up, or down.

“Volkswagen UK is exploring the breadth of changing sales models, evidenced most recently by the opening of our first UK retail store in the Birmingham Bullring.

“However, it is important to note that this is with the full involvement and engagement of our retailer partners – in the case of the Bullring, that is Johnsons Volkswagen.”

Johnsons Cars has run Johnsons Volkswagen retailers in Birmingham since 2004 and is a partner with the long-term pilot project. The premise is based on a ‘no haggle’ pricing model.

The store has a team of 16 made up of hosts, ‘ambassadors’, a logistics coordinator, an account manager and store manager.

Stock is on hand for tests drives that can be taken from the Bullring car park. Staff are not on volume commission and prices are exclusive to the Bullring store.

Volkswagen refused to comment on what its current average return on sales figure is for the UK dealer network and when asked about how dealers fit in with a potential new online sales portal the spokesman said: “Volkswagen UK is investigating all potential sales models.”

Volkswagen passenger cars has had a flat 2017 so far with SMMT’s latest November data showing registrations up by 0.9% year-to-date or 1,723 units to a total of 193,117 units. If split evenly between the network this equates to nine extra units per dealer from January to the end of November.

However, other volume manufacturers have also had a difficult year with Vauxhall down 22.25% year-to-date and Ford down 8.64%.

AM understands that Volkswagen is due to issue new dealer contracts next year but the brand said “contract management is an ongoing process”.

The spokesman said: “We wouldn’t comment on the specifics of any trading arrangements.”