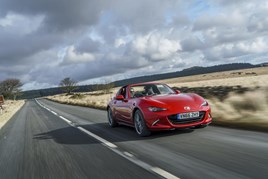 New research by Mazda has revealed that 55% of UK drivers, and almost 60% of European drivers, see a positive future for petrol and diesel engines.

The Mazda Driver Project research – commissioned together with Ipsos MORI – polled 11,008 people across key European markets and an average of 58% believe there is “a lot of innovation and improvement still to come with petrol and diesel engines”.

The headline results demonstrate that consumers don’t necessarily share the view of many organisations that the internal combustion engine has no role to play in the future of cars.

Despite this, the demand for  alternative fuel vehicles (AFVs) rose by 23.8% in January (compared to January 2017), while diesel vehicles suffered a 25.6% fall in registrations, according to figures released by the Society of Motor Manufacturers and Traders (SMMT).

This is further demonstrated by the fact that 29% of UK drivers “hope that diesel cars will continue to exist” as electric cars become more common, 44% hope that petrol will continue and 36 % of drivers stated that if running costs were the same as an electric car they would “prefer a petrol or diesel car”.

The findings arrive as Mazda ramps up its ‘Sustainable Zoom-Zoom 2030’ vision to combine the best of internal combustion engines with effective electrification technologies. Central to this ambition is SKYACTIV-X, the world’s first commercial petrol engine to use compression ignition; this new engine combines the advantages of petrol and diesel engines to achieve outstanding environmental performance, power and acceleration performance.

Mazda Motor Europe’s president and CEO Jeff Guyton, said: “The research findings are fascinating. The whole basis of our long-running Drive Together campaign is to celebrate the sheer joy of driving, and it appears that European drivers see a long road ahead for the internal combustion engine – we are working hard to make that road an even better experience for drivers everywhere.”