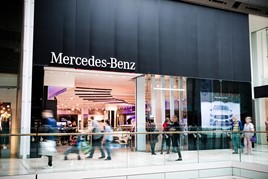 Mercedes-Benz has opened a pop-up store in London’s Westfield shopping centre, to showcase the new A-Class.

A number of models will be showcased in the temporary store, giving the brand a chance to interact with a range of new and existing customers and arrange test drives.

The Westfield pop-up store is a joint project between Mercedes-Benz Cars UK and Mercedes-Benz Retail Group, open between now and July 4.

More than one million people have visited Mercedes-Benz pop-ups, since the first was opened in 2015.

Existing car brands at the Westfield site include Seat and Tesla.  A number of other manufacturers have previously set up temporary spaces at the shopping centre, such as Dacia, Citroen and Jaguar Land Rover.

The shop will launch with an Approved Used C-Class Cabriolet and smart fortwo cabrio before a Mercedes-AMG takeover happens in mid-June.