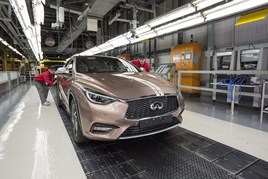 A 5.2% uplift in UK car manufacturing outputs during April was not enough to arrest a double-digit decline in supply for the domestic market since the start of the year, the SMMT has reported.

Monthly vehicle production data published by the Society of Motor Manufacturers and Traders today revealed that the UK’s car manufacturing output rose by 5.2% in April, with 127,952 vehicles rolling off British production lines.

Demand up at home and overseas, with exports accounting for 81% of total output.

But the year-on-year rise was flattered by a slump in production during April last year, when an untimely Easter break was partially blamed for a reduction in output.

Year-to-date the UK’s car production total remained down by 3.9%, with a total of 568,378 cars leaving production lines in the first four months, as the home market suffered a 10.3% decline in demand.

The SMMT said that new models rolling off UK production lines had helped bolster output during April, with demand for the new Honda Civic and Nissan Leaf among the key additions since the start of 2017.

But Hawes added that the SMMT was still lobbying for frictionless international trade as a key driver for continued growth in the sector. 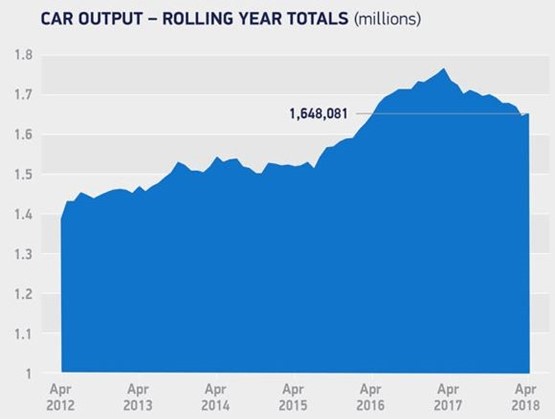 He said: “Given such investment was made on the basis of the free and frictionless trade afforded by our EU membership, the ability of UK plants to attract the next wave of new models and drive future growth depends upon maintaining these competitive conditions after Brexit.

“That’s why it is critical that government acts to safeguard our participation in the EU customs union and single market.”

Speaking to AM at the Commercial Vehicle Show in Birmingham last month Hawes said that failing demand for new cars in the UK market could trigger a more widespread reduction in the UK’s car dealership numbers following Vauxhall’s move under its PSA Group owners, according to the SMMT.

He told AM: “The UK does have a reputation of being one of the most progressive and innovative car retail markets in the world and if major manufacturers do want to test something out they will often do it here.

“The staff in the retail market also have a strong reputation of adapting to changing markets. If the market does continue to decline, manufacturers will obviously look at the number of retail outlets they have.”