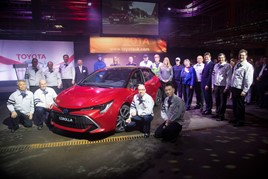 Toyota has now started production of its new Corolla hatchback and touring sports wagon at its Burnaston factory in Derbyshire.

The new Corolla will be the first Toyota model in Europe to offer customers the choice of two hybrid powertrains: an upgraded 1.8 litre engine that is manufactured at the Toyota Deeside engine plant in North Wales, and a new 2.0-litre hybrid powertrain.

The new Corolla Hatchback and Touring Sports wagon will be launched commercially across Europe from February 2019.

The new Corolla is the first model to be built in the UK using the Toyota New Global Architecture (TNGA) platform, the foundation for new generations of Toyota vehicles worldwide

In March 2017, Toyota Motor Europe announced investment of £240 million in its Burnaston operations for the introduction of TNGA production, upgrading its facilities with new equipment, technologies and systems.

Marvin Cooke, Toyota UK managing director, said: “This is a real sign of confidence in the capabilities of our workforce and in TMUK as a centre for world-class manufacturing.”

> Pictures of the new Toyota Corolla