Toyota emerged as a clear winner in the first Electric Vehicle (EV) Dealer Attitude Survey to be conducted by the National Franchised Dealers Association (NFDA).

Just 11 car manufacturers currently selling cars through a franchised car dealer network in the UK delivered the 20% response rate required to qualify for inclusion in the survey and the NFDA referred to these as the “top eleven in the EV arena (pure EVs and plug-in hybrids)”.

It said: “They are the market leaders and those who have sufficiently engaged with their dealers for them to have concerns on the EV issue.” 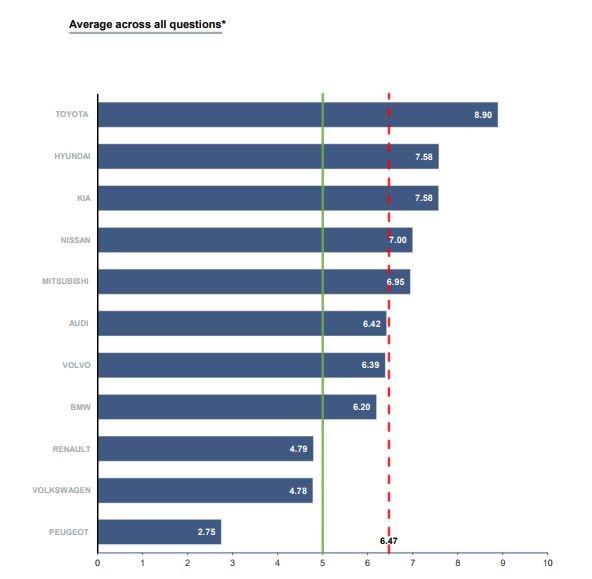 Hybrid technology pioneer Toyota topped the rankings, with an average overall score across 13 questions – rated from one to 10, as in the NFDA’s other surveys – with an average score of 8.9 (average: 6.47).

Sue Robinson, director at the NFDA, said: “It was encouraging to see a fairly high overall average score of 6.47* in the first edition of the Electric Vehicle Dealer Attitude Survey (EV DAS), although it is clear that various networks are calling on their manufacturers to address a number of specific issues.

“The EV DAS highlights where constructive relationships between dealers and manufacturers are creating favourable retail environments for EVs and outlines potential challenges that need to be addressed.”

Robinson said that the question related to manufacturers’ proposed plug-in hybrid and pure EV product range for the next two years saw the highest average score demonstrating a degree of optimism amongst retailers.

In answer to this question the top three brands remained consistent with the overall average, with Toyota scoring 9.13, Hyundai 8.77 and Kia 8.5.

The survey revealed a range of responses on various questions, with Toyota topping all but one category, with Nissan retailers expressing they were most pleased with the application of the Government’s plug-in car grant (PICG), which has been dramatically changed since the survey was conducted in July. 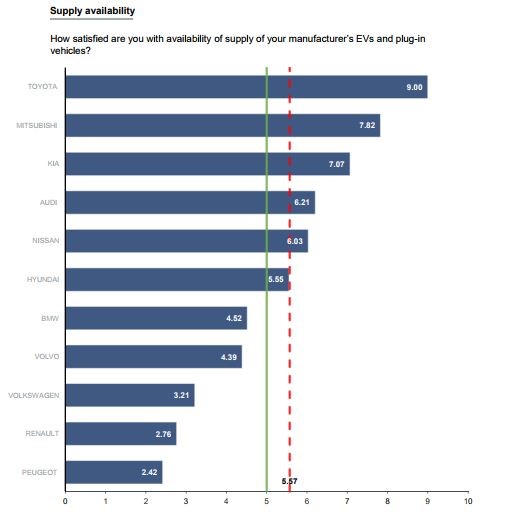 Mitsubishi rose into second place in response to a question on the supply of alternatively-fuelled vehicles (AFVs), meanwhile.

The NFDA said that it was “unsurprising” that many retailers were primarily concerned with the supply of AFVs, with the question returning the lowest average score of the whole survey.

Robinson said: “Going forward, as EVs and plug-ins become more popular, we expect more networks to participate in the survey.