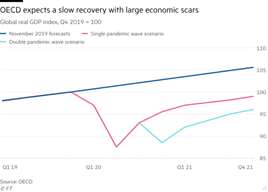 If there’s no second wave of COVID-19 there is plenty of hope for a V-shaped economic recovery, the SMMT Summit was told yesterday.

Doubts remain over the strength of that recovery, but attendees of the virtual conference heard that car sales have been building quickly in countries that have come out of lockdown.

Talking through the company’s global sales, Dr Christian Dahlheim, Volkswagen AG head of group sales, said China has almost returned to normal and in Europe, “hard hit” by the pandemic, sales are already climbing to around 70-75% of the typical levels.

Dahlheim said Volkswagen expects a V-shaped recover, but in Europe the recovery will continue through 2021.

“In essence, it’s a V-shaped recovery lasting until 2022,” he added. There are encouraging signs of demand, as once lockdown lifts sales have been climbing to close to those of the previous year. He warned however there will be a long-term impact from the financial support governments have provided to safeguard industries and jobs.

The pandemic has sparked a worldwide recession. Chris Giles, economics editor of the Financial Times, said the outlook is an “enormous” 6% contraction of the world economy.

Recovery won’t be helped by the tensions between the US and China and international taxation challenges, and even though countries have domestic recovery policies in place there is not the global level of cooperation there was in 2008-2009.

The data shows that as domestic economies reopen there is a V-shape recovery generally, he said, but not fully.

It will “fall short”, he said, pointing to the OECD forecast for the end of 2021 which expects the economic output of the advanced economies to still be 5% below November 2019 - a bigger gap than the 2008 financial crisis - due to the new ways the world will have to do business until a vaccine is available.

The UK’s economic output was down 25% in April at the peak of the coronavirus crisis. But since opening in June, shops have recorded that consumer spending came back rather quickly, he said.

After the measures implemented then, the UK Government is now moving into a second phase of support, with some assistance likely in specific sectors such as hospitality and travel.

Giles warned a scrappage scheme for cars is unlikely as Whitehall suspects it would benefit overseas manufacturers and economies – as 90% of UK new cars sold are imported. He inferred that Government doesn't see supporting dealers as a priority.

By the end of this year there will be consolidation as “the reckoning” of this crisis, he said.

“There is going to be quite a bounce back in the months ahead, and in the future we’ll need to face the facts honestly that there’s been a lot of damage done by this crisis, and there will be a difficult path ahead,” he added.

Brexit still needs to be settled and Giles said he’s optimistic about the UK and European Union achieving a trade deal, because it’s what both sides desire.

That doesn’t mean it will be a great deal for the UK, it might be a compromise, he said.

Adrian Hallmark, chairman and CEO of Bentley Motors, said this is the third crisis for the UK’s automotive industry in less than three years: WLTP caught much of the industry unprepared, then came hard Brexit preparations, and lately COVID-19.

Hallmark praised the Government’s actions to support business through the current crisis, but added he’d like “the same kind of open dialogue” between the UK Government and the auto industry to examine how to get to ‘net zero’ carbon emissions.

He believes longer range plug-in hybrids are part of the solution, not just pure electric vehicles.

Graham Hoare OBE, chairman of Ford of Britain, said reaching zero tailpipe emissions in the UK by 2035 is “a challenge we all need to rise to” but it “needs a clear and consistent pathway to bring change”.

Hoare said the industry and government must learn lessons from overseas, such as Norway which has spent 30 years building confidence in consumers and today pure electric vehicles are 70% of its market. “It’s that consistency that’s so essential,” he said.

Hoare said that means a broad range of incentives, at point of sale and during use of the vehicle, for the long term. Government could set goals in the short term that build the long-term outcome it desires, he said.

Governments want it, and half of consumers are willing to drive an electric car, but the biggest hurdle is infrastructure. Once that problem is solved the transition from ICE to EV will accelerate, he said.