Volkswagen more than doubles EV deliveries in first half of 2021 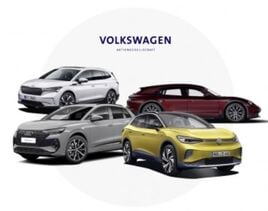 Volkswagen Group has delivered more than twice as many electric vehicles (EVs) in the first half of 2021 when compared to the previous year.

The largest proportion of Volkswagen Group EVs (128,000) were delivered to Europe and include recently launched models like the Audi Q4 e-tron, Skoda Enyaq IV and Porsche Taycan Cross Turismo.

Plug-in hybrid models have proved even more popular, with deliveries trebling to a total of 171,300 in the same period.

Christian Dahlheim, head of group sales at Volkswagen Group, said: “Our global electric offensive continues to make good progress and customer demand is high. This year, we plan to deliver around one million electrified vehicles for the first time and are confident that we will meet the fleet targets for CO2 emissions in Europe.”

The BEV model offensive of the core Volkswagen brand started in Europe last year with the ID3. This model was followed this year by the ID4 SUV, which was also launched in the USA and China in March. In addition, the ID6 has been available in China since June.

Slightly more than half of the EV deliveries throughout the world up to the end of June bore the logo of the core Volkswagen brand, which handed over 92,859 vehicles to customers (share: 54.3%).

Volkswagen Group is developing a new scalable platform that will underpin all its future electric vehicles (EV), as part of its new roadmap to electrification.