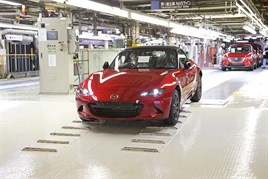 The sports car was reviewed by Top Gear presenter Richard Hammond in the last show to air before BBC2 ended the series prematurely in the wake of Jeremy Clarkson’s fracas with the show’s producer.

On the Sunday evening when the Top Gear TV show was aired, traffic to the Mazda Motors UK website was more than 1,000 times greater than usual, aftersales director David Wilson-Green told AM.

The company had prepared for the expected leap in interest by routing through a number of servers, however the website still crashed very briefly before recovering.

The carmaker had set its Mazda MX-5 pre-order enquiry page to go live coinciding with the Top Gear show, and it generated more than 100 leads which are being passed to Mazda dealers, said managing director Jeremy Thomson.

Mazda has not yet announced the pricing of the new MX-5, which is due to go on sale in late summer.

At the end of June the open top sports car will be centre stage in Mazda’s display at the 2015 Goodwood Festival of Speed, where there will also be an MX-5 themed experience area with live music, and the two-seater roadster will drive the hill climb route during the Moving Motor Show.

Thomson said: “The MX-5 is Mazda’s brand icon and it embodies all that is great about our products. Its fun to drive character has strengthened the bond between Mazda and its customers for 25 years. So there’s no better place to showcase the all-new Mazda MX-5 than in front of the enthusiastic crowd at the Goodwood Festival of Speed.”