Car dealer Vertu Motors has this morning reported a 23% increase in turnover and profit before tax up 33% year-on-year for the 12 months to February 28.

Like-for-like new retail sales volumes rose by 6.4%, used vehicle volumes were up 9.2% (the third year of volume growth) and service revenues were up 3.5% (the fifth successive year of growth).

“Many businesses within the dealership portfolio in the group have the potential to achieve enhanced margins.

“We have substantial funds and financial capacity for further expansion and continue to see attractive acquisition opportunities. You will see development of our premium based business.”

He acknowledged the trend in larger groups expanding through acquisitions, with factors driving this, the importance of the internet with groups being able to invest significantly in web platforms, manufacturers' requirements for significant capital expenditure that some smaller independents are more averse to taking the risk on and "manufacturer intolerance to underperformance, which we have clearly been a beneficiary of as we've been able to increase their market shares in a local territory and improve customer experience scores".

"They're looking for operators who are effective and also well capitalised," he said.

On May 1, Vertu announced it had bought Lancaster Jaguar in Bradford from Jardine Motors and Land Rover Bury from Pendragon. 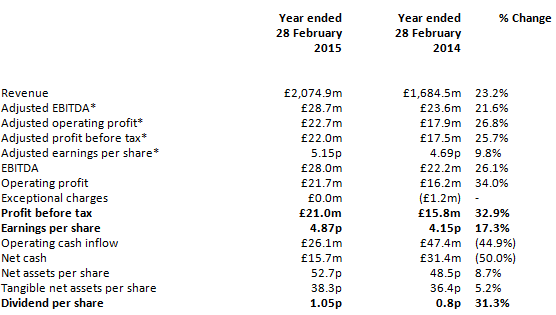 Video: Forrester on his growth strategy posted this morning

“Vertu has delivered an impressive set of results on a number of fronts.

Adjusted PBT has come in 3% ahead of our forecasts driven by ongoing growth in the core business and strong cash conversion.

The core business also continues to outperform the market, with 2016E starting well prompting us to upgrade our 2016E and 2017E earnings per share forecasts by a further 1-2%.

While the group has come a long way since inception and is on the cusp of becoming a £30m EBITDA business, it is not resting on its laurels and has a number of long term initiatives in place to ensure this strong growth continues.

The shares continue to look significantly undervalued to us trading at a small premium to net assets per share, and on a 2016E P/E below 11x, we see scope for significant share price appreciation from here as it continues to execute its successful growth strategy.

Finals: Revenues were 1% ahead of our forecast, with adjusted EBIT marginally below, albeit operating margins advanced 4bps during the course of the year to 1.1%. Interest costs were significantly lower than our forecast of £1.5m at £0.7m driven by strong cash generation and good stock control.

A key positive was the board’s decision to increase the dividend by 31.3% for the full year, which was 17% ahead of our forecast as it moves towards 4x cover on a normalised basis. This highlighted its confidence in future profit growth and cash generation.

Key performance drivers: Overhead recovery continues to be a feature of driving profit growth in the business, with operating expenses as a percentage of revenues falling 40bps during the year to 9.9%. This is despite investing heavily in the business and new sales executives, with the commission structure also kicking in on higher volumes. It is once again pleasing to see all functions of the business model working well. Acquisitions continue to perform as planned (gross profit including acquisitions and closed sites +£1.1m), while further progress continues to be made in the core business (gross profit +£12.8m). Within the core business, used cars was once again the star performer with LFL volumes an industry leading +9.2% in a constrained market as the substitution effect into new cars continue.

Forecasts: On the back of the confident trading update and strong start to the new financial year, we are increasing our 2016E and 2017E adjusted PBT forecasts by £0.5m, which drives a 1-2% EPS upgrade. We believe the Group has strong embedded profit growth, with 41% of current revenues generated from dealerships acquired in the last four years or 48% of outlets.

Valuation: Vertu trades at a clear discount to the sector on all core measures, which we believe is unjustified given its clear growth and track record delivered to date. It is also worth pointing out that the shares trade at a small 10% premium to its current net assets per share, which suggests the market is not placing too much value on its growth potential at present. Compiling the various valuation techniques used in the note, we average 107p per share, which ranges from 130p on our DCF including acquisitions to typical mid cycle EV/EBITDA multiples based on 2017E estimates at 82p.”

> For more analysis on Vertu's results and the biggest dealer groups in the UK, come to the AM100 Dinner on June 11 to see the official unveiling of the AM100 listing ahead of publication in AM. It’s also a great opportunity to network with those retailers. More details at www.am100dinner.co.uk

AM Poll
Are you training your staff on commission disclosure ahead of the January FCA changes? Please leave a comment
Vote
View all
1832