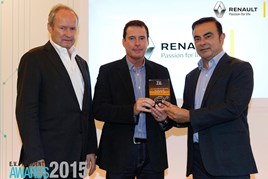 Renault started incentivising its global network of Z.E. Expert dealers in 2013 and the Renault EV Awards recognise the dealerships which deliver the strongest performance in EV market share and sales volume for the previous year.

Ghosn paid tribute to the commitment of the group’s dealers. He commented that Renault and the Renault-Nissan Alliance as a whole had enjoyed a clear head start in developing electric vehicles – a technology of the future – and underscored the importance of the dealer network in advising customers on this new form of motoring and guiding their choices.

“We were the first car manufacturer to offer a range of electric vehicles – a strategic decision that was both ambitious and responsible. Renault is now number one in Europe in the EV market and the Renault-Nissan Alliance is number one globally, selling more than 250,000 vehicles to date,” said Ghosn.

The global Renault Z.E. Expert network has expanded continuously since the release of the first electric vehicle. By the end of 2014, there were 770 Z.E. Expert Centres, an increase of 9% on 2013. Around 700 of these dealerships are located in Europe.

As of the end of May 2015, the Renault brand had sold more than 65,000 electric vehicles worldwide.