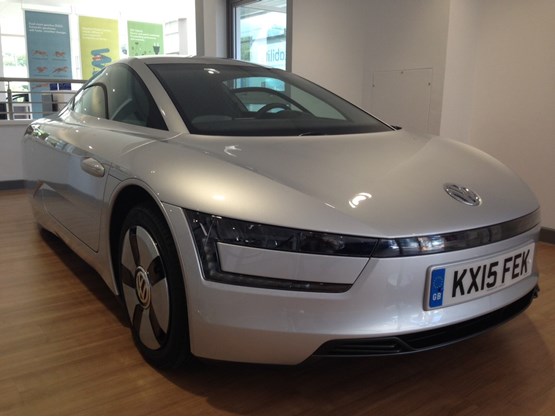 Volkswagen is producing just 200 of their ‘car of the future’, with just 26 destined for the UK. The Marriott Motor Group is the second retailer in the UK to see the model in the showroom.

Standing just 45.4inches tall the XL1 has an aerodynamic look based on sports car design principles that easily disguises the record breaking combined fuel efficiency that is capable of 313miles per gallon – the equivalent of a journey from London to Newcastle.

Managing director Paul Barnard said: “The XL1 is a ground-breaking concept for Volkswagen that has already won a Design of the Year Award. We are very proud to be one of the few to own the world’s most fuel efficient car.

“My family has been selling cars for over 90 years and I can honestly say that I have never seen  anything quite like the XL1!  The ground-breaking sporty design and gull-wing doors disguise the fact that this vehicle can achieve over 300mpg.  Shorter than a Polo and lower than a Porsche, this is a car of the future that has been built today. It’s also pleasing to see that we are one of the very few to see it in our Volkswagen Showrooms.

“I’m sure that the XL1 will feature prominently in the evolutionary history of motor cars and feel honoured that The Marriott Motor Group are only the second UK dealership to take delivery of this fabulous car.”

Costing in the region of £100,000 the XL1 is currently on display at its Ipswich Volkswagen site, and will be seen at its showrooms in Bury St Edmunds, Stowmarket, and Kings Lynn, in the near future.

AM Poll
Are you confident your teams are booking back most deferred 'amber' work from services? Please leave a comment.
Vote
View all
397