Vertu Motors' revenues rose by 5% in run up to August 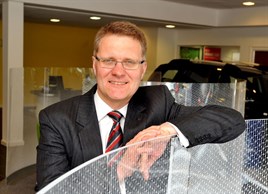 Vertu Motors reports that overall revenues from the five months trading to July 31 are up 5%.

In a pre-close trading statement ahead of its October 14 interim results announcement, Vertu said the dealer group also continues to record overall organic growth in volume , revenue and profit, and its September order book is up year-on-year.

Robert Forrester (pictured), Vertu Motors chief executive, said: "We are pleased with the way the business has performed in the period and the board is confident in the future.  The recent strength of the new car market will continue to grow our high margin aftersales business.

"The UK economy is growing, the UK consumer is spending and new and used cars are very affordable."

New car like-for-like revenues for the period were +0.4% vs. UK private registrations running at +2.9% during the period (1.5% in Vertu’s franchises). Fleet volumes fell by 6.7% on a like-for-like basis, although this was tactical as it moved away from lower margin channels and gross profit per unit in this segment strengthened as a result.

Gross profit per unit strengthened during the period on a like-for-like basis demonstrating manufacturer new car volume targets have been achieved.

The performance in used cars remained strong with like-for-like volumes +4% vs. a market growing at 1-2%, and vs. a prior year comparative of 11.9%. Like-for-like gross margins and gross profit per unit declined modestly in line with expectations.

At Vertu’s stockbroker Zeus Capital, analyst Mike Allen said: “Vertu continues to deliver good organic volume, revenue and profit growth as it continues to benefit from its strategy to improve the quality of its earnings. Importantly, the order book for September appears to be building ahead of last year’s record volume, and the balance sheet remains very strong ahead of any further potential M&A activity.”

He added that with the new car market stabilising at a high level, consumer spending robust and cars very affordable, Zeus believes the sector prospects remain sound. A rising car parc resulting from this is also beneficial for higher margin aftersales, which Vertu should benefit from given its successful customer retention strategy.

“We maintain our forecasts following an upgrade in May, but believe our forecasts are conservative with upside potential as we progress into H2. Overall, we believe the valuation remains undemanding, and continue to think the company is well positioned for further growth,” Allen said.

Zeus forecasts H1 adjusted profit before tax to come in around £15m mark versus £13.3m delivered, which it said would imply a very modest uplift in H2.