Dealer group property requirements have declined by 24% in since the beginning of 2014, but investment in upgrades is high reflecting market confidence.

Adam Wadlow, a director at Barber Wadlow,  said: “This statistic does not however point towards a slowdown in demand for dealership accommodation.

“2013/14 was an exceptionally busy year, when manufacturers started to apply pressure on dealers to upgrade facilities following the financial crisis.

“Many of these requirements will also not have been satisfied yet.

“The current number of advertised requirements is a return to more normal levels and we are starting to see requirements being satisfied, which demonstrates confidence in the market given that a new development will generally cost between £4million and £8m.”

Barber Wadlow has acquired sites located across the UK over the last 12 months on behalf of dealers.

Moreover, improved market conditions in the commercial property market has seen a number of major mixed use development schemes finally come to fruition having been shelved since 2008.

“This has provided a supply of dealership development sites, albeit not at a fast enough pace to satisfy impatient manufacturers.

But there are also a number of pinch point locations elsewhere in the UK – in one particular town we are aware of six ‘live’ franchise dealership requirements and no immediate or suitable solutions.

There has been an increase in land values throughout the UK, which is particularly evident in the South East as a result of competition from dealer groups, as well as higher value alternative uses, the report says.

Rental growth is also now being recorded outside of the South East in certain locations.

“Notwithstanding this, we are seeing rental levels for sale and leaseback (‘S&LB’) transactions being set at ‘below market’ values,” Wadlow said.

This does not, however, mean that rental values are falling.

“It is a product of dealers employing ‘cost recovery’ strategies (ie capital receipt generated from S&LB only required to cover development cost, rather than turn a profit) and the very strong investment market, which means that a rent can be set at below market levels.”

With an increase in land values as shown above, and development costs rising by up to 7% over the last 12 months (Source: BCIS), where retailers are required to work with a developer, then rental values are being pushed upwards.

Manufacturer pressure on timescales is also resulting in further increases on development costs. 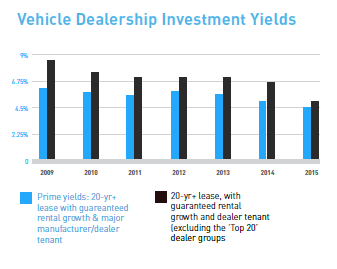 Yields have again compressed throughout 2014 and into 2015, driven by the high demand from institutional investors for long-term leases with guaranteed rental growth.

Sector appeal is further enhanced by the “exceptional” sector performance which is enhancing the financial status of tenant covenants.

“Lack of supply of investment product is also having a massive impact.

“The current market size therefore equates to only third of the market at its peak in 2007/08.

“An ongoing trend is the high proportion of the market that is made up of investments let to dealer tenants (as opposed to manufacturers).”

“This demonstrates investors’ better understanding of the property sector, which is shown by the prices that are being paid.”

“The most substantial yield compression has been for smaller dealer covenants, once considered secondary stock and trading at a 100 – 150 bp’s discount to prime values.

“On the basis that property/investment fundamentals are strong (ie modern facility, major franchise and long-term lease with guaranteed rental growth), then the differential can be little more than 25 – 50 bases points, and in certain cases, at parity.

“Furthermore, we have seen yield compression for properties let on 10/15-year leases, demonstrating that investors are now taking a longer term view looking at asset management opportunities such as lease re-gears to add value.” 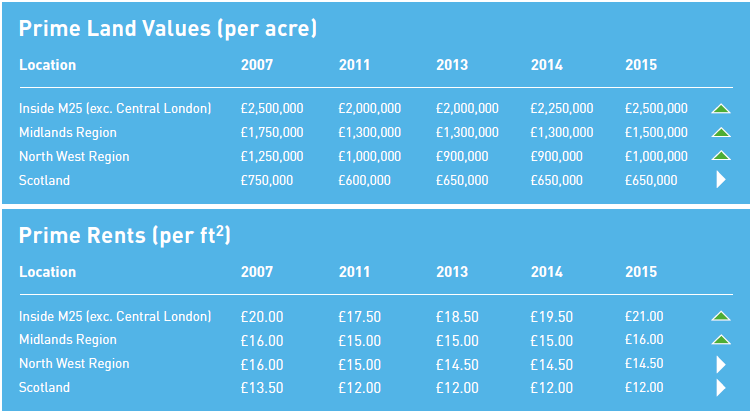 **Excludes abnormal portfolios, namely the Pendragon portfolio that sold in Q1 2015 for circa £250m