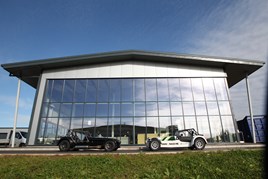 Caterham Cars has appointed BookaTrack, based at Donington Park race circuit, as its new dealer in the Midlands.

The new showroom will open in January 2016 and it also sees Caterham’s Experience day activities relocate from Silverstone to Donington Park at the same time.

Aftersales will start immediately. BookaTrack Caterham will also offer a store and forward service, allowing customer cars to be stored indoors and securely at Donington Park.

The move marks the first time that prospective Caterham customers will be able to experience retail demonstrations in a Seven on track, due to the exclusive circuit access that Donington Park has given to BookaTrack Caterham at selected times.

The BookaTrack team already maintains and services its fleet of 12 Sevens that are used for track days at Donington.

BookaTrack’s director, Jonny Leroux, said: “The opening of our own Caterham franchise at Donington Park is the culmination of over 15 years worth of passion, enthusiasm and commitment to both brands.

“The strong partnerships BookaTrack has forged with both parties makes this a natural progression for us and one that we're all very excited to be involved with.”

Caterham has been working with BookaTrack since its inception in 2000. BookaTrack will continue to operate a fleet of Caterhams at around 120 events per year at race circuits across the UK and Europe.