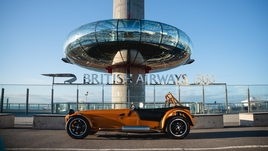 Engineers from Caterham will attempt to build a new Caterham Seven 170 in less than six hours in a glass pod elevated 450ft above Brighton’s seafront.

The team will aim to assemble the newly-launched sports car model – the lightest ever created by Caterham, at around 440kg – in the British Airways i360 pod this Thursday (September 30).

And customers from the brand’s five-site UK retail network can book a place to go and see the build in-action at what has also been described ats the UK’s tallest pop-up car dealership.

A statement issued by the brand said: “A team of Caterham engineers are setting themselves the dauting challenge of building the car in around six hours using Halfords Advanced hand tools.

“The build is happening between 10am-4pm – which is no easy feat when it’s estimated a one-person build takes around 100 hours.”

Standing at 531ft, British Airways i360 is taller than the London Eye, Big Ben and Tower Bridge.

The glass viewing platform offers 360-degree views of the south coast and the English Channel, which car enthusiasts can also enjoy while the vehicle build is in action.

Caterham Cars chief executive, Graham Macdonald, said: “This is our lightest ever product so we wanted to launch it in a memorable way.

“We certainly feel opening the world’s highest car dealership in the British Airways i360 does that while also bringing to life how light the car is.

“In addition to opening the dealership, our team of engineers will showcase one of the most exciting things about our product – that you can build it yourself.

“We have built cars in interesting places before but never this high. It will certainly add another layer of complexity and excitement to the build.”

It can sprint to 62mph in just 6.9 seconds, according to Caterham.

It is also one of Caterham’s most environmentally friendly cars to date, with a CO2 figure of 109g/km.