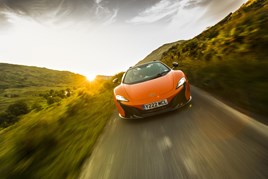 Responsible for the south west of England, the new outlet at The Laurels, Cribbs Causeway, will complements the existing McLaren Automotive UK retailer network of London, Birmingham, Manchester Glasgow and, most recently, Ascot.

The new facility will be operated by Rybrook Holdings, who already run McLaren Birmingham, and is expected to be operational in Q2 of 2016.

The timing of the appointment comes soon after the start of production of the new Sports Series, and McLaren Bristol will provide sales and aftersales services for all three tiers of McLaren models – Sports Series, Super Series and Ultimate Series.

Jon Pollock, regional director for Europe at McLaren Automotive, said: “We are pleased to announce this important appointment in the representation of the McLaren brand in the UK.

“Rybrook Holdings is already an important business partner operating one of the retailers which the McLaren brand launched with in 2011, and this latest location in Bristol is perfectly situated to help support customers in this vital area of the UK – our third largest market globally.”

Henry Whale, managing director of Rybrook Holdings, said: “The appointment of McLaren Bristol is an important step for Rybrook and the representation of McLaren.

“McLaren Birmingham has been a great success for Rybrook and we look forward to the same achievements from the new facility in Bristol.”