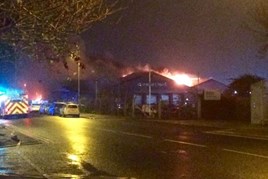 Around 50 nearby residents had to be evacuated to a community centre after the blaze broke out at the facility in Girdleness Road at around 5am this morning.

A spokeswoman for the dealership said: “It is our absolute priority to help all customers who had cars on site to be mobile again by offering a replacement courtesy car on a like for like basis where possible.

“We understand this is a hectic time of year and we are doing all we can to minimise the inconvenience to those affected.

“We are working to reduce any disruption to the local community.

“The branch is currently closed however we will endeavor to transfer all appointments to our surrounding sites.

“At the moment an investigation is taking place and we will provide an update in due course.”

In a statement, the Scottish Fire and Rescue Service said that they had tackled a "well-developed" fire in the workshop area of the dealership, which had also affected the adjoining sales operation.

"Due to the severity of the fire and risks, crews were forced to withdraw and fight the fire externally to ensure firefighter safety."

AM understands that the fire service is currently working to determine the cause of the blaze.