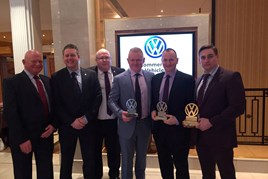 Swansway Garages has emulated its awards double-double as a Volkswagen retailer with success in the brand’s Commercial Vehicle Awards.

The wins came after Swansway’s Crewe Volkswagen dealership was named Volkswagen’s retailer of the year and the group was named the manufacturer’s Best Retail Group - both for the second year in a row - at Volkswagen’s annual One Business Awards.

Swansway Group director John Smyth said: “Doing the double for two consecutive years, that just shows how consistent we are and that we carry on doing the basics right, day in day out.

“I want to say a massive congratulations and thank you to all our Volkswagen Commercial teams, across all four sites. Particular congratulations must go to the team at Liverpool – what a sensational result, from a really great team.”

The Awards are a celebration of the balanced scorecard results for 2015, recognising outstanding performance, in all areas, all of the time.